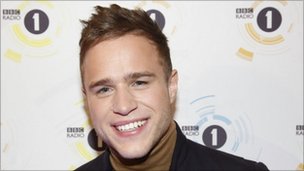 Ollie was the fastest rising name, however Olly Murs' spelling of the name was 113th most popular
Continue reading the main story

Oliver and Olivia were the most popular baby names across England and Wales in 2010 for the second year running, figures show.
The top four boys' names - Oliver, Jack, Harry and Alfie - all held their popularity, the Office of National Statistics' 2010 list shows.
There were no new entries in the girls' top 10, but Sophie, Emily, Lily and Amelia all rose into the top five.
Ollie was the fastest rising name in the boys' top 100 while Olly was 113th.
When looking at the figures just for Wales, Oliver and Ruby were the most popular boys' and girls' names.
In eight of the English regions, Oliver was the most popular name, however Jack came top in the North East.
Among baby girls, Olivia was the top name in seven English regions, Sophie was the most popular in the East and Lily in the South West.
The top 10 boys' names in order were: Oliver, Jack, Harry, Alfie, Charlie, Thomas, William, Joshua, George, James and Daniel.

The name Maisy saw the highest rise in popularity, rising from 141 in 2009 to occupy the 100th place in the list for 2010.
Annabelle, Eliza, Laila, Maryam and Maisy were the five new names for girls on the list.
Figures released at the end of last year by the General Register for Scotland and Northern Ireland's Statistics and Research Agency showed that Jack and Sophie were top of both lists.
at July 28, 2011