Phone-hacking: Judge will use powers to demand evidence 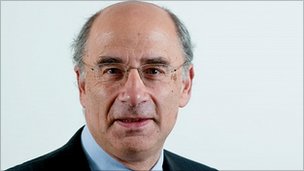 The judge leading the public inquiry into the phone-hacking scandal says he will use his powers to demand evidence from witnesses "as soon as possible".
Lord Justice Leveson said he would also invite all editors, journalists and media owners to flag up what they saw as "inappropriate" practices.
His inquiry will examine press ethics and practices in relation to the public, politicians and police.
Public hearings will begin in September and report back within a year.
"It may be tempting for a number of people to close ranks and suggest the problem is or was local to a small group of journalists then operating at the News of the World," said Mr Leveson.
"I would encourage all to take a wider picture of the public good, and help me grapple with the length, width and depth of the problem as it exists."
Mr Leveson said he would not have accepted the role had he "the slightest doubt" about his position.
It emerged last week that Mr Leveson had attended functions with Rupert Murdoch's son-in-law, but that he had informed Prime Minister David Cameron before his appointment was announced.
Mr Murdoch has been questioned by MPs over allegations of widespread phone-hacking at the News of the World, which was shut down earlier this month.
Media ethics The inquiry will stage a preliminary hearing in September, ahead of a series of seminars in October on topics such as the law, media regulation, ethics of journalism and the practice and pressures of investigative reporting.
"At some stage, there needs to be a discussion of what amounts to the public good, to what extent the public interest should be taken into account and by whom," said Mr Leveson.

Corruption is in no way endemic in the police service”

End Quote Tim Godwin Met Police Acting Commissioner
Similar seminars would be held later in relation to press relationships with police and politicians, and on the plurality of the media and cross-media ownership, he said.
The role of the Metropolitan Police has come under the microscope since the phone-hacking scandal arose, with allegations that officers took money from the News of the World for information.
Sir Paul Stephenson resigned as Commissioner of the Met after it emerged the paper's former executive editor Neil Wallis had been employed by Scotland Yard as a public relations consultant.
His temporary replacement, Acting Commissioner Tim Godwin, was being questioned on Thursday by members of the Metropolitan Police Authority.
He told them that corruption was "in no way endemic" in the force.
However, he added: "It would be foolish for me if I didn't acknowledge the perceptions that have been created over the past weeks."
Mr Godwin said the Met should therefore examine its media relations, including ensuring transparent hospitality records.
at July 28, 2011