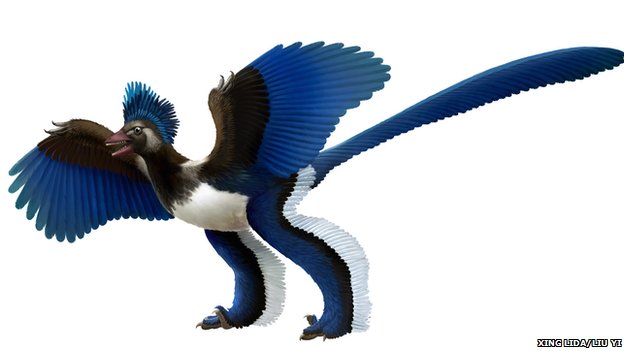 An artist's impression of the new creature from China. How will it change our view of the origin of birds?
Continue reading the main story

A chicken-sized dinosaur fossil found in China may have overturned a long-held theory about the origin of birds.
For 150 years, a species called Archaeopteryx has been regarded as the first true bird, representing a major evolutionary step away from dinosaurs.
But the new fossil suggests this creature was just another feathery dinosaur and not the significant link that palaeontologists had believed.
The discovery of Xiaotingia, as it is known, is reported in Nature magazine.
The authors of the report argue that three other species named in the past decade might now be serious contenders for the title of "the oldest bird".
Archaeopteryx has a hallowed place in science, long hailed as not just the first bird but as one of the clearest examples of evolution in action. 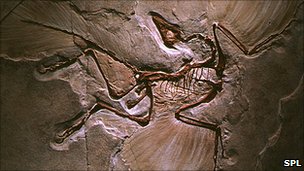 Wobbling perch: Archaeopteryx is one of the most famous fossils ever unearthed
Discovered in Bavaria in 1861 just two years after the publication of Darwin's Origin of Species, the fossil seemed to blend attributes of both reptiles and birds and was quickly accepted as the "original bird".
But in recent years, doubts have arisen as older fossils with similar bird-like features such as feathers and wishbones and three fingered hands were discovered.
Now, renowned Chinese palaeontologist Professor Xu Xing believes his new discovery has finally knocked Archaeopteryx off its perch.
His team has detailed the discovery of a similar species, Xiaotingia, which dates back 155 million years to the Jurassic Period.
By carefully analysing and comparing the bony bumps and grooves of this new chicken-sized fossil, Prof Xu now believe that both Archaeopteryx and Xiaotingia are in fact feathery dinosaurs and not birds at all.
"There are many, many features that suggest that Xiaotingia and Archaeopteryx are a type of dinosaur called Deinonychosaurs rather than birds. For example, both have a large hole in front of the eye; this big hole is only seen in these species and is not present in any other birds. 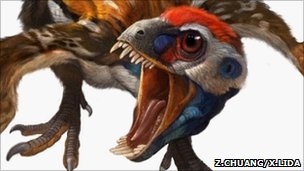 "Archaeopteryx and Xiaotingia are very, very similar to other Deinonychosaurs in having a quite interesting feature - the whole group is categorised by a highly specialised second pedo-digit which is highly extensible, and both Archaeopteryx and Xiaotingia show initial development of this feature."
The origins of the new fossil are a little murky having originally been purchased from a dealer. Prof Xu first saw the specimen at the Shandong Tianyu Museum. He knew right away it was special
"When I visited the museum which houses more than 1,000 feathery dinosaur skeletons, I saw this specimen and immediately recognised that it was something new, very interesting; but I did not expect it would have such a big impact on the origin of birds."
Other scientists agree that the discovery could fundamentally change our understanding of birds. Prof Lawrence Witmer from Ohio University has written a commentary on the finding.
"Since Archaeopteryx was found 150 years ago, it has been the most primitive bird and consequently every theory about the beginnings of birds - how they evolved flight, what their diet was like - were viewed through the lens of Archaeopteryx.
"So, if we don't view birds through this we might have a different set of hypotheses."
There is a great deal of confusion in the field says Prof Witmer as scientists try to understand where dinosaurs end and where birds begin.
"It's kind of a nightmare for those of us trying to understand it. When we go back into the late Jurassic, 150-160 million years ago, all the primitive members of these different species are all very similar.
"So, on the one hand, it's really frustrating trying to tease apart the threads of this evolutionary knot, but it's really a very exciting thing to be working on and taking apart this evolutionary origin." 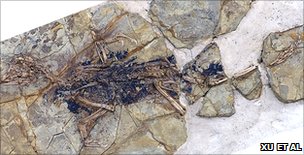 Prof Xu first saw the specimen in a museum. He knew right away it was special
Such are the similarities between these transition species of reptiles and birds that other scientists believe that the new finding certainly will not mean the end of the argument.
Prof Mike Benton from the University of Bristol, UK, agrees that the new fossil is about the closest relative to Archaeopteryx that has yet been found. But he argues that it is far from certain that the new finding dethrones its claim to be the first bird.
"Professor Xu and his colleagues show that the evolutionary pattern varies according to their different analyses.
"Some show Archaeopteryx as the basal bird; others show it hopped sideways into the Deinonychosaurs.
"New fossils like Xiaotingia can make it harder to be 100% sure of the exact pattern of relationships."
According to Prof Witmer, little is certain in trying to determine the earliest bird and new findings can rapidly change perspectives.
"The reality is, that next fossil find could kick Archaeopteryx right back into birds. That's the thing that's really exciting about all of this."
at July 28, 2011