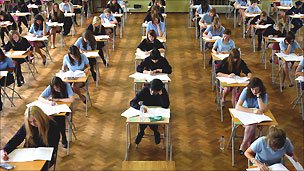 The government should "think again" about the introduction of the English Baccalaureate to secondary schools in England, says a committee of MPs.
The so-called EBacc requires pupils to gain good GCSEs in English, maths, two sciences, a language and humanity.
But the Commons education select committee says it risks "shoe-horning" pupils into inappropriate subjects.
Schools minister Nick Gibb says "all children have the right to a broad and balanced education".
But the cross-party MPs' report says it should not be "up to a group of politicians" to decide which individual subjects should be given priority.
And it questions whether the EBacc should even be given that name, when "it is not a baccalaureate as generally understood".
'Negative consequences' The report says that the good intentions of the EBacc - to ensure that pupils have access to a core of academic subjects - have been undermined by how it has been implemented.
The report highlights a failure to consult about the likely impact of the new measure - and says the government needs to examine the complaints from head teachers and professional groups.

There have been strong concerns raised on behalf of subjects which are not part of the EBacc, including religious education, art, music and ICT.
There have been warnings that schools will downgrade their support and staffing for these subjects, which will not count towards league table rankings for the EBacc.
There have also been concerns that schools will arrange their timetables to maximise their EBacc scores - which might then limit the subject options available to individual pupils.
The select committee report shares such concerns, arguing that "a fairly narrow range of subjects, demanding considerable curriculum time, is likely to have negative consequences on the uptake of other subjects".
The introduction of the EBacc, and decisions about its subjects, should have been left until a review of the national curriculum had been completed, says the report from MPs.
"For now, the EBacc is not part of a balanced score card," said committee chairman Graham Stuart.
Poorest pupils The ASCL head teachers' union welcomed the report saying that the EBacc would create a "perverse incentive for schools to concentrate on those subjects at the expense of others".

End Quote Nick Gibb Schools minister
Kevin Stannard of the Girls' Day School Trust, representing independent girls' schools, said the EBacc "elevates the interests of some academic disciplines over others - for no obvious educational reason".
"The government's performance tables are supposed to be about transparency. The EBacc is certainly that - it is possible to see right through it."
But Mr Gibb argued that the EBacc would make sure that children had access to subjects that would be valuable for work or university.
"These academic subjects reflect the knowledge and skills young people need to progress to further study or to rewarding employment.
"It cannot be right that children from the poorest backgrounds are significantly less likely to have the opportunity to take GCSEs in these subjects than children from more advantaged areas.
"Just 8% of children eligible for free school meals were entered for the EBacc subjects last year compared to 22% overall."
Shadow education secretary Andy Burnham said: "This damning verdict leaves the secretary of state and his ministers isolated.
"There is now a clear professional consensus that, if left unchanged, the English Bacc will have a number of damaging effects on our school system.
"It limits student choice, narrowing the range of subjects on offer in schools. We are already hearing that RE, music and art teachers are being made redundant."
at July 27, 2011