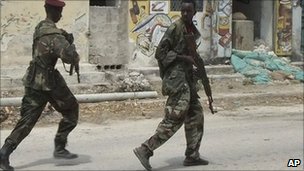 Heavy fighting has broken out in the Somali capital, Mogadishu, a day after the UN World Food Programme airlifted in its first famine emergency aid.
At least four people are reported to have been killed as government forces, backed by African Union troops, attacked Islamist insurgents.
The BBC's Mohamed Dhore in Mogadishu says the clashes are in northern areas and unlikely to affect the aid effort.
Thousands have arrived into government-controlled suburbs in search of food.
Correspondents say if the pro-government forces manage to gain more ground this could enable aid agencies to increase the areas where they can deliver food aid to victims of the severe drought.
The WFP delivery is the first airlift of food aid since the UN declared a famine in two southern areas of Somalia last week.
Al-Shabab, the al-Qaeda linked group which controls much of Somalia, has banned the WFP from its areas.
Our correspondent says the fighting started just after dawn when the government and African peacekeeping troops launched an offensive on an al-Shabab stronghold in the north of the city, about 7km (four miles) from the airport.
Continue reading the main story

Extended drought is causing a severe food crisis in the Horn of Africa, which includes Kenya, Ethiopia, Djibouti and Somalia. Weather conditions over the Pacific means the rains have failed for two seasons and are unlikely to return until September.

An estimated 10 million people in the region are affected by the drought. The UN has declared a famine in two areas of southern Somalia, where 30% of children are acutely malnourished and four children out of every 10,000 are dying daily.

The humanitarian problem is made worse by ongoing conflicts. Militants had lifted a ban on aid agencies operating in parts of southern Somalia, but now say reports of famine are exaggerated and have again limited access.

Since the beginning of 2011, around 15,000 Somalis each month have fled into refugee camps in Kenya and Ethiopia looking for food and water. The refugee camp at Dadaab, in Kenya, has been overwhelmed by an estimated 400,000 people.

Farmers unable to meet their basic food costs are abandoning their herds. High cereal and fuel prices had already forced them to sell many animals before the drought and their smaller herds are now unprofitable or dying.

The refugee problem may have been preventable. However, violent conflict in the region has deterred international investment in long-term development programmes, which may have reduced the effects of the drought.

The result of climate conditions, conflict and lack of investment is that 6.7 million people in Kenya and Ethiopia are currently existing on food rations, and relief agencies estimate 2.6 million in Somalia will need assistance a new emergency operation.

BACK 1 of 9 NEXT
Government officers told the BBC they had gained some ground and were now trying to dislodge al-Shabab from Mogadishu stadium.
Our reporter says it appears to be an attempt to push back the insurgents just ahead of the holy month of Ramadan which starts over the weekend - a time when al-Shabab has often launched attacks including suicide bombings.
Lt Col Paddy Ankunda, a spokesman for the 9,000-strong AU force in Mogadishu, said 41 al-Shabab fighters had surrendered during the clashes.
The weak interim government controls about 60% of Mogadishu, including the airport, the port, the presidential palace and areas around the city's largest market.
Tens of thousands of Somalis have fled areas controlled by al-Shabab to Mogadishu and neighbouring Kenya and Ethiopia in search of assistance.
The UN refugee agency said on Tuesday that some 100,000 people had arrived in Mogadishu and settlements around the city in search of food and water in the past two months.
Earlier this week, Somali Foreign Minister Mohamed Ibrahim warned that more than 3.5 million people "may starve to death" in his country.
The WFP aid delivery came in by plane on Wednesday because sending it by boat would have taken months.
Challiss McDonough, a spokeswoman for the WFP, said the 10 tonnes of Plumpy'nut, a peanut-based paste high in protein and energy, would be enough to treat 3,500 malnourished children for a month.
Given the demand for food aid in Somalia, the delivery is just a drop in the ocean, says the BBC's East Africa correspondent Will Ross, in Nairobi, Kenya.
Somalia is thought to be worst-hit by the crisis, but Ethiopia, Kenya and Djibouti have also been affected.
More than 10 million people in the region are thought to be at risk from the worst drought in 60 years.