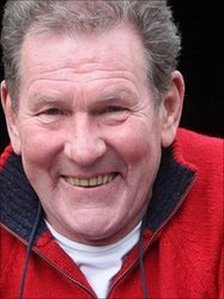 Stuart Mungall's wife had Pick's disease and was unable to move
The star of the original Yorkie chocolate bar adverts has admitted killing his terminally-ill wife.
Stuart Mungall, 71, denied murdering Joan, 69, at their home in Tooting, south London, in December last year.
The prosecution accepted a guilty plea to manslaughter on the grounds of diminished responsibility.
The Old Bailey heard Mungall had had depression as a result of the strain of caring for her. The former actor faces jail as his wife had not asked to die.
Mark Dennis QC, prosecuting, said Mrs Mungall, who had a degenerative disease, told a nurse the day before her death that she was "taking it all in my stride".
After smothering his wife with a pillow, in what he said was a "mercy killing", Mungall took tablets to end his own life.
Mr Dennis asked for a sentence of less than a year and Mungall served six months in custody before being bailed.
Handsome lorry driver But the Recorder of London, Judge Peter Beaumont, said he wanted to explore all the possibilities.
Mungall was released on conditional bail until 23 September while reports are prepared.
The judge said: "You present a difficult sentencing exercise because you took the law into your own hands and you took a life in doing so."
Mr Dennis told the court: "There is no evidence his wife had wanted to end her life prematurely or that she encouraged him to act in the way he did.
"Despite outward appearances he had been unable to cope. He developed a depressive illness which led him effectively to snap.
"He wanted to end a situation he found intolerable for her and himself."
'No resistance' Mrs Mungall had been a Royal Shakespeare Company player and the couple had been married for 43 years.
They ran a gardening centre in south London together but had to sell the business when Mrs Mungall's health deteriorated.
Miranda Moore QC, defending, said: "He took the life of the woman he loved."
Mungall had acted after he "saw it in her eyes" and Mrs Mungall, who had Pick's disease, had not shown signs of resistance, she said.
Miss Moore said he was spurred on by the pain his wife was in.
Mungall found fame in the 1970s as the handsome lorry driver in the adverts for the chocolate and went on to appear in Casualty, The Bill and other television series.
at July 28, 2011