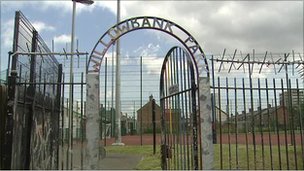 The shots were fired at Willowbank Park in west Belfast
Gunmen have opened fire in a park in west Belfast, forcing children to run for safety.
The incident happened in Willowbank Park, just off the Falls Road, on Tuesday night.
The gunmen arrived at the park as a football match was taking place on a pitch close to a children's play area.
The men called out some names of people they were looking for and when they could not find them, fired a number of shots in the air.
Dozens of people were in the park at the time.
Sinn Fein said the incident appeared to be a falling-out between dissident republicans and local youths.
A mother who lives nearby said her two children had been traumatised by the incident.
She said her daughter was "terrified".
"She had to hide under the slide in the park, she was squealing," the woman added.
"My wee boy of three came down to me and had his hands to his ears saying that it was noisy and had scared him.
"I was really shocked that my children saw that kind of thing."
Sinn Fein councillor Steven Corr said frustration over anti-social elements could not justify what had happened.
He said council park rangers who had closed up the park at 21:00 BST had described an "eerie silence".
"Somewhere that would have been packed and bursting with life an hour before was dead, there was no-one here," Mr Corr said.
The police said they had not yet received a complaint about the incident but enquiries were continuing to establish what had happened.
at July 27, 2011