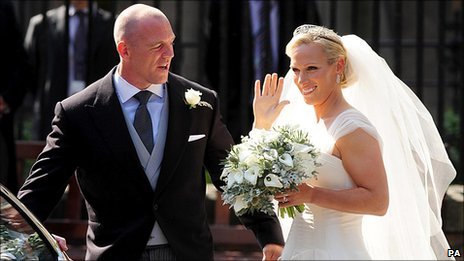 The Queen's granddaughter Zara Phillips has married England rugby player Mike Tindall at a ceremony in Edinburgh.
The Queen and Duke of Edinburgh were among those at the wedding in Canongate Kirk on a sunny Royal Mile.
Hundreds of well-wishers lined the streets for Scotland's first royal wedding in almost 20 years.
Prince Charles and Camilla, Prince William and Catherine, and Prince Harry were also attending the ceremony and reception at Holyroodhouse.
The Reverend Neil Gardner welcomed guests up the Royal Mile, including the Queen and Duke of Edinburgh.
The bride's dress, an ivory silk and satin gown, was designed by Stewart Parvin, one of the Queen's favourite couturiers. This was accompanied by a veil, tiara and Jimmy Choo shoes. 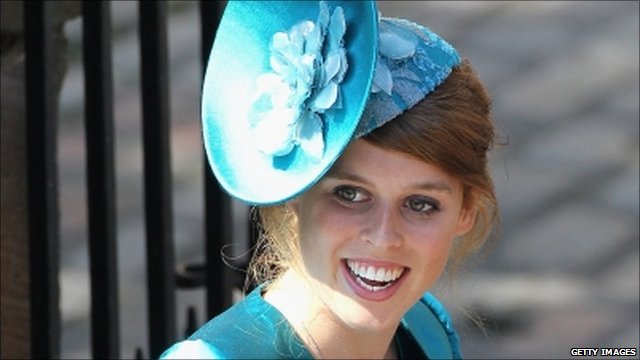 Click to play
It is Scotland's first royal wedding in almost 20 years
The doors of the Canongate Kirk were closed to the press and public, but hundreds of well-wishers gathered in Edinburgh's Old Town to watch the arrival and departure of the Royal Family.
After the ceremony the couple emerged arm-in-arm, stood on the steps to the entrance to the 17 Century kirk and shared a kiss.
The newlyweds arrived back at the palace as the Royal Scots Association pipe band played.
Among the crowds who turned out for the day was Jackie Rushton, 48, from Yorkshire, who told BBC Scotland: "I just love anything to do with the Royal Family, I'm a big fan, I have great respect for them."
Another well-wisher, Margaret Kittle, 76, travelled from Winona in Canada to see the wedding.
She said: "I've come to all the royal weddings since Princess Anne and Mark Phillips' wedding.
"I like to come to the weddings and all the royal occasions that I can, because the Queen is queen of Canada."

Zara Phillips is believed to be setting a royal precedent by not taking the surname of Mike Tindall.
Even when they marry commoners, Royal brides have always adopted the family name of their partners.
When Lady Sarah Armstrong-Jones, daughter of Princess Margaret and the Earl of Snowdon, wed Daniel Chatto in 1994 she took on his name.
Zara's decision appears to be based on the fact she wants to preserve her sporting persona and business interests.
The former equestrian world champion is known throughout the sport as Zara Phillips and she has signed a number of deals which help fund her sporting interests.

Other guests included Prince Andrew and his daughters, Princess Beatrice and Princess Eugenie.
The private afternoon ceremony will be followed by a reception at the Palace of Holyroodhouse.
The couple hosted a pre-wedding party on the royal yacht Britannia, which is moored in Leith, on Friday night.
They had previously attended a rehearsal for the ceremony at the kirk with the bride's parents, Princess Anne and Captain Mark Phillips.
Princess Anne's second marriage, to Timothy Laurence, was the last Scottish royal wedding in 1992.
Zara, 30, will keep her maiden name when she marries. It is understood this is because of her sporting career in equestrianism.
Mr Tindall, from Otley in Yorkshire, plays for club side Gloucester and has been capped more than 60 times for his country.
He invited some of England's best-known rugby players to the wedding.
He and best man Iain Balshaw were part of England's winning 2003 rugby World Cup squad in Australia, where the couple were introduced by Zara's cousin Prince Harry.
Lothian and Borders Police said they had been working with the Palace and Edinburgh City Council to ensure the event's smooth running.
Supt Ivor Marshall, who is the Silver Commander responsible for overseeing security arrangements, said the kirk's location, close to both the Scottish Parliament and the Palace of Holyroodhouse, yet set on the busy tourist hub of the Royal Mile, presented unique challenges.
at July 30, 2011