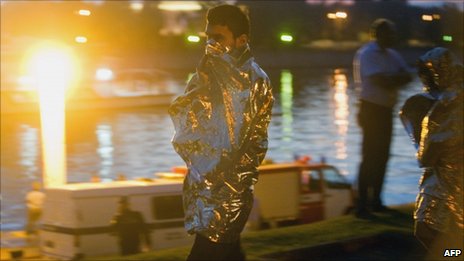 Seven of the 17 people on board were saved, officials say
Continue reading the main story

A pleasure boat has sunk on the Moscow river in Russia's capital, drowning five people and leaving five more missing, the emergency ministry has said.
Seven of the 17 people on board have been rescued, it said.
Reports say the boat, the Swallow, collided with a barge at 0058 on Sunday (2058 GMT Saturday).
The accident comes three weeks after a tourist boat sank on the Volga river in Tatarstan, killing more than 100.
Rules breached A spokesman for Moscow's emergency ministry told Agence France-Presse the "bodies of five passengers have been pulled out" and that the rescue operation was continuing.
The accident took place close to the city's Luzhniki sports stadium.
Yury Besedin, an emergency ministry official, told local television the accident was "provisionally believed to have taken place because of breaches of shipping rules".
Three weeks ago the 80m (260ft) Bulgaria - a double-decker river cruiser built in 1955 - listed during a thunderstorm on the Volga river and sank in minutes, trapping many passengers inside.
About 80 people were rescued.
Officials said the boat was designed for 140 passengers and crew but it had been carrying 208 people. It also lacked the correct licences and one of its engines was not working, prosecutors said.
Russian police arrested the director of the company that rented the boat and a ship registrar who certified it.
at July 31, 2011