Why some children 'don't know their name' 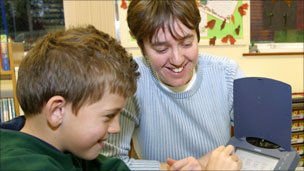 Are there really children in the UK who start school or nursery not knowing what their names are or even that they have a name?
That was the startling claim by the government's poverty czar Frank Field on Saturday.
Now he has been backed by the person charged by the government with improving children's communication skills - Jean Gross - and others.
Jean Gross says her visits around England have shown her this is true "in extreme cases" - but that there are many more children whose chances in life are being held back because they struggle to communicate with others or understand them.
She says it is a growing concern.
Speaking on the Today programme, she said: "I have talked to a lot of head teachers and they have an increasing concern both about that extreme end where children might not know they have a name but also about the children who don't have many words, can't express themselves or don't understand what is said to them."
Neil Wilson, the executive head teacher of a group of schools in south Manchester, said the problem was "more widespread than we give it credit for".
"A significant majority know their names when they enter the nursery, but some do not," he said.
Jean Gross says anecdotally the situation seems to be getting worse - but that data gives a "mixed picture".
She says the last five years have seen a 58% increase in the number of children under five being identified at school as having speech and language problems but at the same time, teachers' checks made on pupils in reception classes (age four and five) show an "improvement year on year".
So it could be that both parents and professionals are getting better at spotting children who have trouble communicating and in giving or getting help for the child.
Socially determined For many children, communication problems are due to biology.
The communications charity ICAN says nine out of 10 children with identified speech and language needs have "long-term difficulties".
Jean Gross says this is true for more than a million children in England, but for others the problem is linked to their environment and the way they are being brought up.
"There are 1.2 million children in this country with a biologically based impairment; their brains are wired differently, but on top of that we also have children where it is more socially determined," she said.
While all parents wanted the best for their children, she said, some were not aware of all the things they could do to help them communicate - the most important being talking and listening to them.

This is the Holy Grail of breaking barriers of underachievement and disaffection,”

End Quote Neil Wilson Head teacher
"I met one young mother who said 'he don't talk to me so I don't talk to him'," she said.
Head teacher Neil Wilson believes one of the reasons behind the problem is that families are talking less to each other.
"The advent of the media, particularly the television, has had a pretty poor impact on communication," he said.
"Once upon a time a family would spend a lot of time talking and nowadays of course they have DVDs, the internet, the TV and so this formal communication process in terms of talking and listening has got worse due to lack of opportunity."
Most experts agree that communication skills are the foundations on which learning - and literacy - are built.
"This is the Holy Grail of breaking barriers of under achievement and disaffection," Mr Wilson said, adding that more resources should be put in to speech and language at primary school.
In England, a planned shake-up of the curriculum for the youngest children (zero to five) will make "communication and language" one of three "prime areas of learning" seen as preparing children to learn at school.
The other two areas are physical development and social and emotional development.
The government also plans to bring in a new developmental check for two-year-olds to try to identify children who might need some extra help.
Hiding under a chair For mother-of-five Alison, from Brighton, spotting that her two-year-old daughter Scarlett had trouble talking and communicating eventually led to the child being diagnosed with mild autism - and getting her the help she needed.
"Because of my other children, I could see that she did not have many words," she said.
After telling a health visitor about her concerns, her daughter was given speech therapy at a local health clinic.
It was there that Alison made contact with workers from the ICAN charity - a meeting she says helped change her daughter's future. 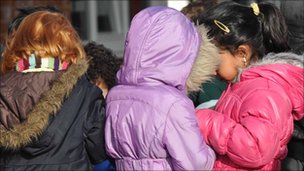 Language and understanding is crucial to learning
The charity offered Scarlett a place at one of its nurseries, where she was given daily therapy. She went on to mainstream primary and now secondary school - where Alison says she now "holds her own" with her peers.
But her first six months at nursery show what life can be like for a child with communication problems.
"When she started she had her head under a chair for six months [hiding]," she said.
"She could not understand what people were saying."
"It was so delightful to see her grow. This gave her the right intervention at the right time and she was a different child within a year.
"She mixed with other similar children and we did not feel we had an odd or naughty child."
It is such early intervention that experts believe can help children overcome difficulties so they can settle down well into school and learn there.
For Jean Gross, the most important thing is to help parents to see that they have a crucial role to play.
"I have never met a parent who did not want the best for their child, but some do not know how to help them," she said.
"We need to get information in to the hands of parents so that they know what they can do," she said.
at July 28, 2011