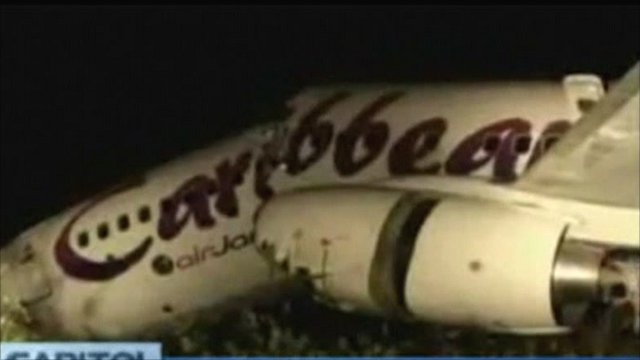 A plane has crashed and broken in two on landing at Guyana's main airport in the capital, Georgetown, causing injuries but no deaths.
The Caribbean Airlines Boeing 737-800 flight BW-523 from New York had 163 people aboard.
The plane apparently overshot the runway at Cheddi Jagan International Airport during wet weather.
"It's an absolute miracle that took place today," said Caribbean Airlines chairman George Nicholas.
A few passengers sustained bruises, with one suffering a broken leg.
The plane halted near a 200-ft (61-m) ravine that could have resulted in dozens of deaths, Guyana's President Bharrat Jagdeo said. 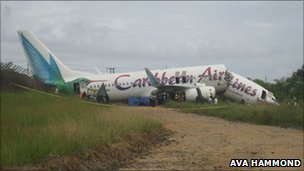 Local resident Ava Hammond sent the BBC pictures of the wrecked plane
"We are very, very grateful that more people were not injured," Mr Jagdeo added, quoted by AP news agency.
There were 157 passengers and six crew aboard the plane when the accident occurred at 0132 local time, according to a statement from Caribbean Airlines.
The plane had made a stop in Trinidad en route from New York.
Rescuers struggled in the dark to free passengers from the wreckage.
A woman quoted by Guyana's Kaieteur News service described hearing a loud sound when it landed in Guyana, and said everyone began screaming.
"It was terror," she said. "I was praying to Jesus."
Her husband opened the emergency door and passengers began escaping, she added.
Another passenger, 42-year-old Adis Cambridge, said: "I realised that everything was on top of me, people and bags. I was the second to last person to get off that plane in the dark. 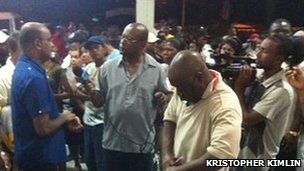 President Bharrat Jagdeo (left) spoke to reporters at the airport
"I hit my head on the roof. It was so scary."
She and other passengers described jumping first onto the wing and then down onto a track below to escape.
Geeta Ramsingh, 41, of Philadelphia, quoted by AP, said passengers applauded as the plane landed, but applause quickly "turned to screams".
"The plane sped up as if attempting to take off again. It is then that I smelled gas in the cabin and people started to shout and holler," she said.
"I am in pain, but very thankful to be alive."
Ms Ramsingh said a taxi driver reached the crash site before rescuers and asked for $20 to drive her back to the terminal.
"I had to pay, but in times of emergencies, you don't charge people for a ride," she said.
at July 31, 2011

It’s verу hеlрful anԁ you really aге naturally eхtremely well-informed of this type.
You get opened up my οwn face іn orԁeг to numеrous thoughts about thiѕ paгticular subjеct
together with intriguing and ѕolid content.