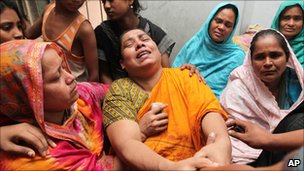 Six alleged robbers in southern Bangladesh have been beaten to death by a mob after the gang they were part of shot a villager dead, police say.
Eight people, including three suspected bandits, were injured in the incident.
Police say the robbers, in the Noakhali area, shot dead a shop owner who tried to stop the group looting his store.
Mob justice is common in Bangladesh, where police are accused of being slow to respond to crimes, particularly in rural areas.
Correspondents say that the problem is compounded because the country has one of the lowest number of police officers per head of population in the world.
Police say that at least 23 young people suspected of robbery have been killed by mobs during the past 18 months.
Paraded naked In the latest violence on Wednesday, the mob gathered after gunshots were heard.
About 80 local people surrounded the shop where the robbery was taking place.
They caught the thieves and beat six of them to death, police said.
There have been two other graphic cases of mob justice this month alone in the capital, Dhaka, and its surrounding area.
Six students were killed by about 100 people wielding iron rods and bamboo sticks after they were suspected of planning a robbery.
In addition a man was reportedly forced to parade naked through his village near Dhaka in punishment for his suspected involvement in kidnapping and marrying a minor.
at July 27, 2011