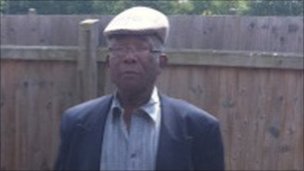 Mr Coley has owned the shop in Shrewsbury Street for 40 years, his nephew said
Continue reading the main story

A suspected armed robber who was stabbed to death during a raid at a florists had been cleared of murder nine years ago, it is understood.
It is believed Gary Mullings, 30, died in hospital following the robbery in Greater Manchester on Tuesday.
Cecil Coley, 72, who ran the shop in Shrewsbury Street, Old Trafford, spent the night in hospital. He has been arrested on suspicion of murder.
A 19-year-old man who went to hospital with stab wounds was later arrested.
He is expected to be released into police custody later and questioned on suspicion of robbery.
It is understood that Mr Mullings was acquitted in January 2002 of the murder of Alan Byron, 18, who was shot dead in a car in Longsight a year earlier. Another man was convicted and jailed for life
Gun found Greater Manchester Police (GMP) were called to the shop at about 21:40 BST on Tuesday.
Ch Supt Mark Roberts, from GMP's Trafford Division, said the shopkeeper's injuries were "not life threatening" and he would be spoken to later. 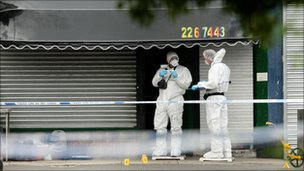 Police cordoned off the scene while forensic examinations took place
He said a gun had been found at the scene, which was being forensically examined.
Police said two people were in the shop "legitimately" at the time it was raided.
Mr Roberts added: "I would like to reassure residents that we do not believe there is any danger to the community and would urge anyone who may have seen something to contact us."
Shrewsbury Street was cordoned off following the incident while scenes of crime officers carried out forensic investigations.
Mr Coley's nephew, Glen Simms, 49, described the shopkeeper as a "hard worker".
He said his uncle had had the shop premises for 40 years, during which time it had been a dress maker's and a fancy goods shop.
"He was like a father to me," he said.
"I heard about what happened [on Wednesday] but none of the family have been able to speak to him in hospital and see that he's ok.
"His health is a huge worry for all of us."
at July 28, 2011

God bless him and i hope he will recover the health soon.
simplythankyou deals in wedding flowers,romantic flowers, celebration bunches and anniversary flowers.
Flower Delivery Belfast