Lancashire motorist on road with 30 points 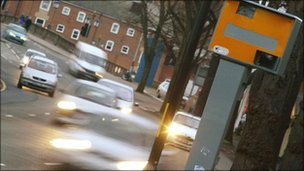 A motorist in Lancashire is still driving with 30 points on their licence, it has been revealed.
The information was obtained from the Driver and Vehicle Licensing Agency (DVLA) via a Freedom of Information (FoI) request from the BBC.
The request found that 436 people in Lancashire and south Cumbria have 12 or more points on their licences but have not been banned from driving.
One driver, from Blackburn, is driving with 30 points on his or her licence.
Twelve points usually means a temporary ban for a driver, but courts can use their discretion if motorists argue that a ban would cause them "exceptional hardship".
'Mockery' of system The DVLA said it has no influence over the sentences imposed.
A spokesman said: "Whilst DVLA maintains a record of all GB fixed penalties and court ordered endorsements, the agency has no responsibility or influence on court imposed sentences.
"Magistrates' courts use sentencing guidelines published by The Magistrates' Association that provide a framework setting out how to establish the seriousness of each case and the most appropriate way of dealing with it.
"This helps ensure that any penalty reflects the seriousness of the offence and the personal circumstances of the offender."
The charity Road Peace described the figures as "shocking" and called for courts to give tougher penalties to those repeatedly committing driving offences.
David Midmer from the charity said: "If we had 12 points and that's it, you lose your licence, and that was stuck to for everybody then clearly that would be the point where they learnt their lesson.
"When you are allowed to go beyond that, for whatever reason, I think it makes a mockery of the whole point."
at July 29, 2011