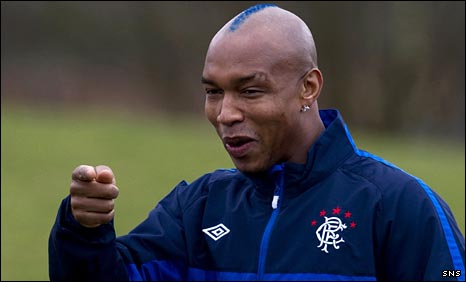 Diouf has not been called into the Senegal national team since April 2009
Blackburn Rovers' El-Hadji Diouf has been banned from all football-related activities in Senegal for five years.
The Senegalese Football Federation (FSF) slapped the ban on the forward after remarks he made in the media about corruption in African football.
An FSF statement read: "Diouf is banned from performing any football-related activity for a period of five years."
Diouf reacted angrily to the FSF's claims that he had failed to appear for a disciplinary hearing last week.
The committee wanted to ask the Blackburn striker about comments he had made on Radio France International, claiming that "the whole system of African football is corrupt".
The federation claimed Diouf had been called to a hearing on 20 July, but the Blackburn forward insisted he had heard nothing of it.

Senegal Football Federtion
He subsequently told French magazine Stade he would "go to war" with the FSF if they took further action.
It remains possible, according to the FSF, that the decision could be reversed if Diouf were to appear before the disciplinary committee.
The news comes as Diouf's club career hangs in the balance.
He has been fined by Blackburn for failing to report on time for pre-season training, and was left out for their pre-season tour to Hong Kong.
Manager Steve Kean said in an interview this week that he thought it was time for Diouf to leave the club, indicating that enquiries have been made by other clubs.