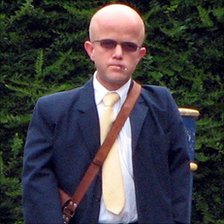 Read performed a sex act under a juggler's hat in front of a teenage girl
An actor who appeared as a goblin in a Harry Potter film has been given a 20-week suspended sentence for indecently exposing himself on a train.
Nicholas Read, 40, of Wade Close, Stoke-on-Trent, was found guilty of performing a sex act under cover of a juggler's hat in October 2010.
A 17-year-old girl told Leicester Crown Court she felt "trapped" sitting next to Read on a London to Leicester train.
Read must undertake a community sex offender group work programme.
In passing sentence, Recorder Richard Bond, said: "A relatively short sentence of imprisonment will not help you and it will certainly not protect the the public from your fantasies.
"I have to ask myself this question: is this a case where not just you, but more importantly, the public would benefit from you receiving a short custodial sentence? The answer to that is no."
The court heard how Read, who played a goblin in the 2000 Harry Potter and the Philosopher's Stone film and an ewok in Return of the Jedi, had previous convictions for making explicit phone calls to "random" women from a hotel room.
Mr Bond ordered Read to pay £500 towards the cost of his prosecution and be supervised by the Probation Service.
at July 29, 2011