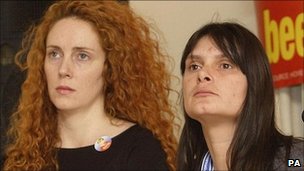 The mother of murder victim Sarah Payne has been told she may have been the victim of phone hacking, her charity has said.
Police told Sara Payne her details were in notes compiled by private detective Glenn Mulcaire, who was used by the News of the World, which championed her Sarah's Law child protection campaign.
The Phoenix Chief Advocates charity says Ms Payne is "devastated".
The paper's owner News International has not yet responded to the claims.
According to a report in the Guardian, the evidence uncovered by police in Mulcaire's notes is believed to relate to a phone given to Ms Payne by the NoW's then editor-Rebekah Brooks "as a gift to help her stay in touch with her supporters".
The BBC has not been able to confirm whether the evidence does relate to this particular mobile.
But Mrs Brooks, who left her role as News International chief executive in the wake of the hacking scandal but denies having had any knowledge of the practice while at the paper, says the phone "was not a personal gift".
In a statement, she said: "These allegations are abhorrent and particularly upsetting as Sara Payne is dear friend.
"For the benefit of the campaign for Sarah's Law, the News of the World have provided Sara with a mobile telephone for the last 11 years...
"The idea that anyone on the newspaper knew that Sara or the campaign team were targeted by Mr Mulcaire is unthinkable. The idea of her being targeted is beyond my comprehension.

Sara is absolutely devastated by this news, we're all deeply disappointed and are just working to get her through it”

End Quote Phoenix Chief Advocates charity
"It is imperative for Sara and the other victims of crime that these allegations are investigated and those culpable brought to justice."
A source close to Mrs Brooks says she believes the voicemail system on the phone provided by the NoW was not activated until 18 months ago.
In such circumstances, it would be difficult for prosecutors to prove that any voicemail interception took place.
The Metropolitan Police's Operation Weeting is investigating claims of phone-hacking at the paper, which was shut down earlier this month after it emerged that the phone of murder victim Milly Dowler may have been hacked while the Surrey schoolgirl was still missing.
It has also been revealed that the families of 7 July 2005 London bombing victims and dead service personnel may have been targeted by Mulcaire, who was jailed in 2007 for hacking into the phones of royal aides for the NoW.
However, in the early part of the decade, Mulcaire had not signed his exclusive deal to supply the News of the World and worked for other newspapers.
Ms Payne had previously said she had been told she was not a potential victim of phone hacking.
But in a statement, the Phoenix Chief Advocates charity said: "Whilst it was previously confirmed by 'Operation Weeting' that Sara Payne's name was not on Private Investigator 'Glenn Mulcaire' list, it has now been confirmed by the 'Operation Weeting' that Sara's details are on his list.
"Sara is absolutely devastated by this news, we're all deeply disappointed and are just working to get her through it.
"Sara will continue to work with the proper authorities regarding this matter, there will be a further statement in due course, but at this point in time, she (or we) can make no further comment."
The Guardian says detectives contacted Ms Payne after discovering notes made by Mulcaire that had previously been thought to relate to a different target.
Committee hearing Ms Payne became a campaigner for the right of parents to know if paedophiles were living in their area after her eight-year-old daughter Sarah was murdered by paedophile Roy Whiting in Pulborough, West Sussex, in 2000.
The NoW championed her campaign for the introduction of Sarah's Law. 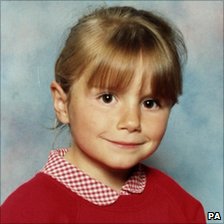 Ms Payne started her campaign after her daughter Sarah was murdered in 2000
In the final edition of the NoW on 10 July, Ms Payne wrote a farewell column for the paper, describing its staff as "my good and trusted friends" and the publication as a "a force for good".
Therese Coffey MP, a member of the culture, media and sport committee, said: "This is another dark chapter in this ongoing saga and I can't imagine the stress Mrs Payne is going through right now."
The committee has heard evidence from Mrs Brooks, News International chairman James Murdoch, and Rupert Murdoch, chairman of parent company News Corporation, all of whom denied knowing about the extent of the phone-hacking allegations at the paper until late 2010.
She said the MPs were meeting on Friday and could choose to reopen its inquiry and call further witnesses.
Meanwhile, the judge leading the public inquiry into phone-hacking says he will use his powers to demand evidence from witnesses "as soon as possible".
Lord Justice Leveson said he would also invite all editors, journalists and media owners to flag up what they saw as "inappropriate" practices
at July 28, 2011