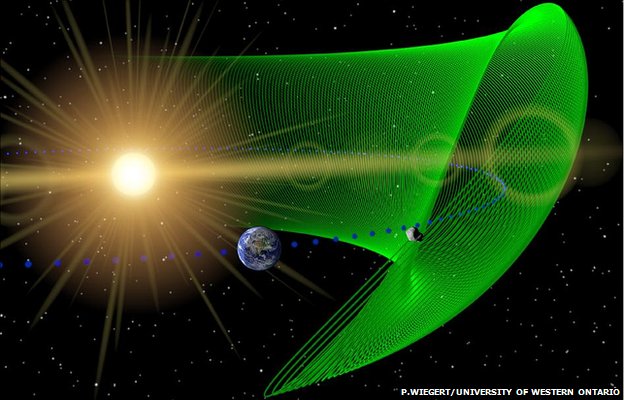 2010 TK7 traces a complex path at its orbital point, moving above and below the plane of the Earth's orbit
Continue reading the main story

Astronomers have detected an asteroid not far from Earth, moving in the same orbit around the Sun.
The 200-300m-wide rock sits in front of our planet at a gravitational "sweet spot", and poses no danger.
Its position in the sky makes it a so-called Trojan asteroid - a type previously detected only at Jupiter, Neptune and Mars.
2010 TK7, as it is known, was found by Nasa's Wise telescope. The discovery is reported in this week's Nature journal.
It is a fascinating observation because the relative stability and proximity of Trojans would make possible targets for astronaut missions when we eventually go beyond the space station.
2010 TK7 is probably not the rock of choice, simply because it travels too far above and below the plane of Earth's orbit, which would require a lot of fuel to reach it.
Nonetheless, its detection means it is highly likely there are other, more suitable Trojans out there waiting to be found.
The difficulty is the viewing geometry that puts any Trojan, from the perspective of an Earth-based telescope, in bright skies. 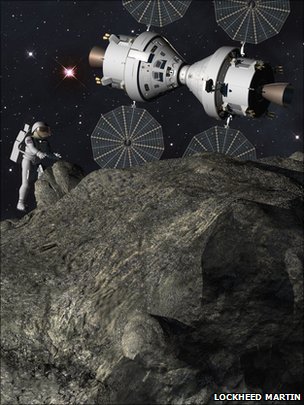 Trojan asteroids are considered possible targets for astronaut missions
It took an orbiting telescope sensitive to infrared light to pick up 2010 TK7.
Wise, the Wide-field Infrared Survey Explorer launched in 2009, examined more than 500 Near-Earth Objects (NEOs), 123 of which were new to science.
The authors of the Nature paper sifted through data on these rocks, looking for the candidates that might be Trojans.
Follow-up work on the Canada-France-Hawaii Telescope confirmed the status of 2010 TK7.
It traces quite a complex path at its orbital point. Currently, it is about 80 million km from Earth, and should come no closer than about 25 million km.
The team says its orbit appears stable at least for the next 10,000 years.
2010 TK7's existence should not really be a surprise. Jupiter, Neptune and Mars all have collections of rocks sitting in the so-called Lagrange points 60 degrees ahead of or behind the planets in their orbits.
In the case of Jupiter, the number of Trojans now tops 1,000 rocks.
"These objects are difficult to find from Earth, simply because they're not very big and they're pretty faint, and they're close to the Sun as seen from Earth," explained Christian Veillet from the Canada-France-Hawaii Telescope and a co-author on the Nature study.
"But we can find them from space, and future satellites will likely find some more. We think that there are others which will be very close to the Earth and have motions that make them relatively easy to reach. So, they could be potential targets to go to with spacecraft," he told BBC News.
at July 28, 2011