Iraq less safe than a year ago: US watchdog 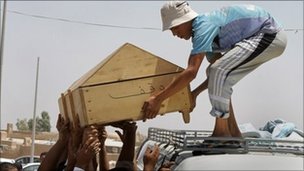 A top US adviser on Iraq has accused the US military of glossing over an upsurge in violence, just months before its troops are due to be withdrawn.
Iraq is more dangerous now than a year ago, said a report issued by the US Special Inspector General for Iraq Reconstruction, Stuart W Bowen Junior.
He said the killing of US soldiers and senior Iraqi figures, had risen, along with attacks in Baghdad .
The report contradicts usually upbeat assessments from the US military.
It comes as Washington is preparing to withdraw its remaining 47,000 troops from Iraq by the end of the year, despite fears that the Iraqi security forces might not be ready to take over fully.
Assassinations "Iraq remains an extraordinarily dangerous place to work," Mr Bowen concluded in his quarterly report to Congress. "It is less safe, in my judgment, than 12 months ago."
The report cited the deaths of 15 US soldiers in June - the bloodiest month for the American military in two years - but also said more Iraqi officials had been assassinated in the past few months than in any other recent period.
While the efforts of Iraqi and American forces may have reduced the threat from the Sunni-based insurgency, Shia militias are believed to have become more active, it said. 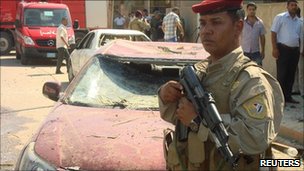 Responsibility for training Iraqi forces will fall to the US State Department after the pullout
They are being blamed for the deaths of American soldiers, and for an increase in rocket attacks on the Baghdad international zone and the US embassy compound.
Additionally, the report called the north-eastern province of Diyala, which borders Iran, "very unstable" with frequent bombings that bring double-digit death tolls.
Mr Bowen accused the US military of glossing over the instability, noting an army statement in late May that described Iraq's security trends as "very, very positive" - but only when compared to 2007, when the country was on the brink of civil war.
A spokesman for the US army in Iraq declined to respond.
Stay or go? The findings come in the middle of what the inspector called a "summer of uncertainty" in Baghdad over whether American forces will stay past a year-end withdrawal deadline and continue military aid for the unstable nation.
Although the US is preparing to withdraw all its remaining troops by the end of the year, in line with mutual agreements, the Obama administration has offered to leave 10,000 to help train the Iraqi forces.
That is politically highly controversial in Baghdad, where Nouri al-Maliki's Shia-dominated government, dependent on support from strongly anti-American elements, has not been able to produce a clear answer, says the BBC's Jim Muir from Beirut.
The situation is clearly very much better than it was at the height of the violence in 2006-7, our correspondent says.
In fact, the overall figures for Iraqi civilian deaths in the first six months of this year, collated by Iraqi Body Count, show a very slight improvement over last year.
But patterns of violence have changed, he adds. There are fewer big bomb explosions, but more targeted killings of Iraqi officials or security forces.
at July 30, 2011