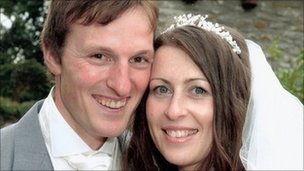 Mr Mullany was a student physiotherapist, and his wife, a doctor at Swansea's Morriston Hospital
Continue reading the main story

Two men have been found guilty of murdering Welsh honeymoon couple Ben and Catherine Mullany in Antigua.
The couple were shot on the Caribbean island on 27 July, 2008, exactly three years ago.
Kaniel Martin, 23, and Avie Howell, 20, both denied killing the couple from Pontardawe, Swansea Valley.
They will be sentenced on 26 September and the Director of Public Prosecutions in Antigua said he is considering asking for the death penalty.
Mr Mullany, a student physiotherapist and former policeman, and his wife, a doctor at Morriston Hospital, Swansea, died after they were shot in the back of the head.
Their parents broke down in tears as the jury delivered its verdict after 10 hours and 20 minutes of delliberation.
Afterwards in a statement, they said: "We will never be able to comprehend the senseless nature of their deaths, the total disregard shown for human life and that no remorse has ever been shown".
Antigua's High Court, in St John's, heard Mrs Mullany died almost instantly and Mr Mullany a week later after he was flown back to Swansea to be placed on a life-support machine. 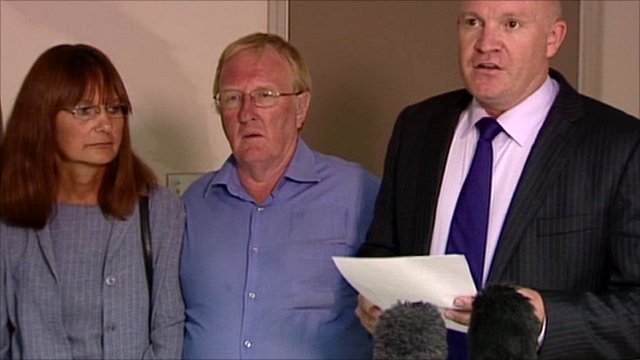 Click to play
A family statement read by Det Sgt Ian Bourne said Ben and Catherine Mullany ''would live in their hearts forever''
'No joy'
The following month Martin and Howell were charged with their murders and that of 43-year-old shopkeeper Woneta Anderson.
The two men, who refused to face questioning in court, had protested their innocence throughout the two-month trial, in which more than 90 witnesses gave evidence.
The Mullanys were shot in their resort cottage on Antigua two weeks after they married.
They were buried in the grounds of St John Evangelist Church, Cilybebyll, near Pontardaw - the same church where they had married.
In their statement issued by South Wales Police, the couple's families said: "There is no joy at today's verdict, just a sense of relief that after three years of waiting there is justice for our children, and for Woneta Anderson and her family. 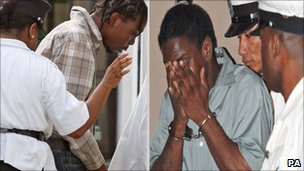 Kaniel Martin and Avie Howell will be sentenced in September
'Silent witness'
"These two individuals can never again inflict the same anguish and devastation to any other family as they have to ours."
During the trial the jury was reminded of the testimony of one of a number of expert witnesses who said a bandana with Howell's DNA was found at Mrs Anderson's shop.
Recordings found on Mr Mullany's stolen Nokia phone were replayed, in which one of the voices identified himself as "Sample Dan" - an alias used by Martin.
Det Supt Keith Niven, who led the Metropolitan Police's investigation team, said he believed Howell and Martin had set out to kill the couple.
"The level of violence inflicted upon their victims in order to steal such low value property was incomprehensible and leads me to believe that murder was their primary intention," he said.

Ben and Catherine must have been terrified when they were awoken and confronted in their room by two strangers pointing a gun at them.”

End Quote
He added: "Ben and Catherine must have been terrified when they were awoken and confronted in their room by two strangers pointing a gun at them.
"Throughout this investigation and throughout the trial the two defendants have shown no signs of remorse not even to Ben and Catherine's parents who have been present in court."
Although Martin admitted to lying to police at first about being near the hotel, his defence team said this was only "because he was scared," the jury was told.
Antigua's Director of Public Prosecutions, Anthony Armstrong, said he "reserved the right to request the death penalty at the sentencing hearing on the 26th September"
Mr Armstrong, the prosecutor in the trial, described the evidence as compelling.
He said: "A defendant wherever he steps, whatever he leaves, will serve as a silent witness against him. 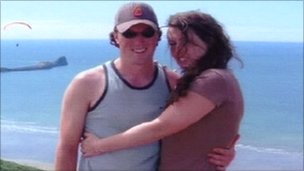 Ben and Catherine Mullany were shot at their hotel chalet at the Cocos resort, Antigua
"Physical evidence cannot be wrong. Only human failure to find it, study and understand it can diminish its value."
The prosecution received help from senior British detectives who were deployed to the Caribbean island following a plea from the country's prime minister who was concerned about the impact the couple's murder would have on tourism.
UK forensics expert Dr Christopher Moynehan, who also gave evidence at a trial into the murder of BBC TV presenter Jill Dando, told the court that tests found gunshot residue on clothing belonging to Howell and Martin.

Ben's values and optimistic outlook on life will carry on through everyone he ever met and he will be missed forever.”

End Quote Adam Mullany Brother
'Natural ability'
After the trial, members of the Mullany family paid tribute to the couple.
They said Mrs Mullany was destined to work in the medical profession, having harboured dreams of becoming a doctor from an early age.
She had attended Ysgol Gyfun Ystalyfera and was described by former teachers as an excellent pupil.
After graduating in 2002 from the University of London, she worked at numerous departments at Singleton and Morriston hospitals in Swansea as part of her training to be a GP.
Hospital officials described her as having a "natural ability to care and being very compassionate" - especially while working at the paediatric unit in Singleton.
Among the young patients she cared for was the son of Swansea City footballer Ferrie Bodde, after the youngster suffered a severe asthma attack.
The Mullanys began their honeymoon in Antigua two days after their wedding.
The couple spent their first night as a married couple camping in an unknown location. They had deliberately kept the whereabouts a secret from their family and friends - and this was why they had chosen Somewhere Only We Know by Keane as their first dance at their wedding reception.
Since their murders, the couple's families have set up a charity, the Mullany Fund, which hopes to widen participation in the field of medicine and physiotherapy by offering grants to students, many of whom are facing sharp rises in tuition fees.
at July 28, 2011