US serviceman held amid 'plot' to attack Fort Hood 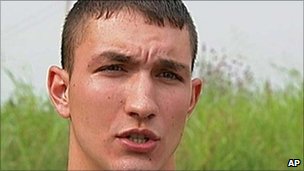 A US soldier who was absent without leave will face federal charges after guns and bomb-making materials were found in his motel room, the FBI says.
Pfc Naser Abdo, 21, was arrested in Killeen, Texas, near the Fort Hood US army base, and had been planning to target military personnel, police said.
The Muslim infantry soldier was granted conscientious objector status last year because of his religious beliefs.
Fort Hood was the scene of a gun rampage in 2009 that claimed 13 lives.
Gun shop's concern Mr Abdo, who is currently being held on an unrelated child pornography charge in Killeen, refused to deploy to Iraq and Afghanistan from Fort Campbell military base in Kentucky before going missing, FBI agent Eric Vasys said.

I would emphasise that any threat Abdo posed is now over”

End Quote Eric Vasys FBI agent
The Texas native was granted conscientious objector status in May 2011 after he said his religious beliefs would prevent him fighting in any war.
Mr Abdo told police following his arrest that he had been planning to target military personnel in a future "terror plot", Killean Police Chief Dennis Baldwin said in a news conference on Thursday.
"Right now we don't have the information that he was working with someone else," Mr Baldwin added.
A statement on the Fort Hood website said Mr Abdo's discharge was "placed on hold pending disposition of charges" related to pornography.
The statement added that though Mr Abdo is "custody of civilian authorities", he could face extra charges, including for going Awol (absent without leave), "if returned to military control".
The Army private had been absent without leave since 4 July, military officials said.
Life scrutinised Mr Abdo was arrested after police in Killeen received a call from staff at America's Best Value Inn, where he was arrested, Killeen police spokesperson Carroll Smith told the BBC. 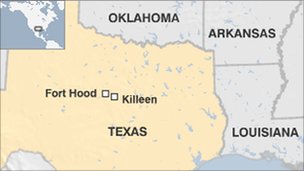 The owner of a gun store also phoned police about a suspicious man who purchased ammunition.
A clerk at the gun store, the same place where the 2009 Fort Hood shootings suspect bought a pistol allegedly used in that attack, told the Associated Press on Thursday that he alerted police after a man bought weapons and gunpowder there this week.
Mr Abdo allegedly also visited another store and bought a military uniform.
Mr Vasys said on Thursday that firearms and "items that could be identified as bomb-making components, including gunpowder" had been removed from the soldier's room.
He added that the FBI planned to charge Mr Abdo with possessing bomb-making components on Thursday, at which time he would be transferred into federal custody.
"I would emphasise that any threat that Abdo posed is now over," Mr Vasys told the Associated Press.
He added: "Suffice it to say, we're looking into all aspects of Mr Abdo's life to determine his motivations and intentions."
On 9 November 2009, Major Nidal Hasan, an Army psychiatrist who was due to deploy to Afghanistan, allegedly shot dead 12 soldiers and one civilian before police bullets wounded him.
Maj Hasan was officially charged in court earlier this month. He faces the death penalty if convicted.
at July 29, 2011