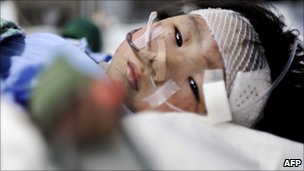 Relatives of some of those killed in a major train crash in China are refusing to accept an offer of compensation from the government.
The 915,000 yuan ($142,000; £87,000) total is double the initial offer made to the families of the 40 victims.
There has been widespread anger at the official response to the disaster.
The crash happened when one train came to a standstill on a viaduct near the eastern city of Wenzhou, and another ploughed into it.
State media say that 10 families have accepted the compensation offer.
Lawyers warned Meanwhile local lawyers have been told to report to the authorities any relatives seeking legal advice, AFP news agency reported, citing the official Xinhua agency.
Law firms should not "unauthorisedly respond and handle the cases", because "the accident is a major sensitive issue concerning social stability", the lawyers are said to have been warned in a statement. 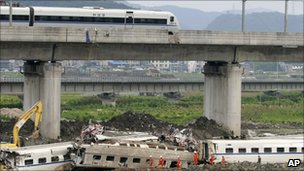 Four carriages plunged from the viaduct
The crash has provoked much anger against the government, not just for its response, but also over its conduct in pushing for rapid development of high-speed train lines.
Many web users, and even some state-media outlets, have accused officials of putting economic development above the safety of the people.
Chinese Premier Wen Jiabao, who visited the crash site on Thursday, vowed to "severely punish" those responsible.
Reports from Hong Kong say the communist party has ordered the media to tone down its coverage.
The Hong Kong Journalists' association said the party's propaganda bureau has told newspapers to focus on positive coverage and stick to comments made by officials.
Flagship project Officials believe a faulty signal may have caused the crash. Four train carriages fell about 30m (100ft) from the viaduct.
On Friday, about two dozen relatives gathered at the crash site to lay flowers and burn incense.
The accident came four years after the opening of the country's first high-speed railway line - one of the government's flagship projects.
Rail experts had warned against the rush to build the world's longest and fastest high-speed rail network in record time amid safety concerns.
Critics of the government allege that corners were cut during construction because of corruption, raising questions about infrastructure across the country.
at July 31, 2011