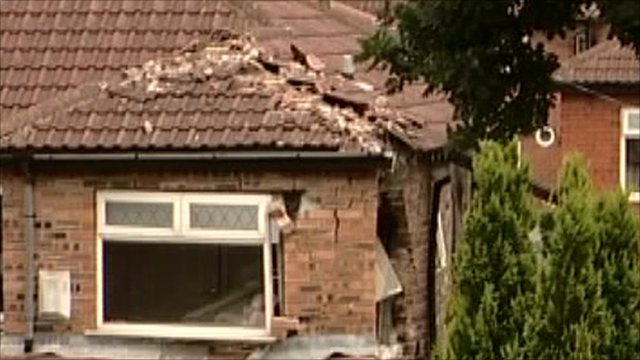 Click to play
Local resident Paul York describes the immediate aftermath of the crash
Two men are in a critical condition after their light aircraft crashed into two houses in Salford.
The plane came down in Newlands Avenue, Peel Green at about 12:20 BST after taking off from Barton Aerodrome.
The men were airlifted to Wythenshawe hospital with serious burns. A man in one of the houses was unharmed.
The BBC understands the plane, operated by Ravenair flying school, was already on fire as it was taking off.
'Like bomb' Mark Frimston, who lives in nearby flats, said: "I heard a bang, like a gas explosion.
"It was as if a bomb went off. My baby started crying because it scared him.
"We could hear screaming, women screaming initially, and then a man screaming in terror. I just panicked and ran downstairs. 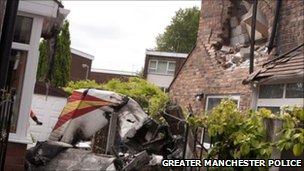 Those first on the scene fought to put the fire out
"When I ran around the corner I could see the plane embedded into the side of a house."
It is understood a man inside one the houses on which the plane landed ran out to try to help the men inside plane. It is not thought anyone else was in either of the semi-detached homes.
Geoff Tarling, a former firefighter, said he saw the plane "dropping" from the sky as he was walking along the street.
"It looked like the pilot was definitely fighting with the plane to get it under control.
He and his son Tim ran to the crash site and saw the plane alight.
"I was terrified that the aviation fuel, if there was any excess in there would go up," he said.
"I knew I wouldn't get hear it. It was too hot for me to approach."
'Cut from wreckage' He tried to keep people away from the wreckage, he said.
Mr Tarling said police officers arrived soon afterwards and tried to put out the flames, along with some other neighbours.
Minutes later, firefighters were on the scene, he added. 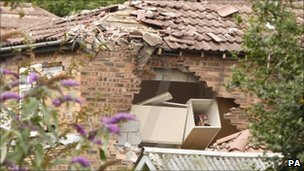 The plane hit the upper floor of one of the houses
Paul Duggan, from Greater Manchester Fire and Rescue, said: "A number of people, including an occupant of the property, two passers-by and a passing police officer... tried to fight the fire by putting water on it.
"That was fairly successful but not until some burns had been sustained by the occupants of the aircraft."
He added: "One occupant of the plane was removed quite quickly but the second had to be cut from the wreckage."
A spokesman for the North West Air Ambulance said: "A man in his late 50s had 70% burns and a man aged 21 had 60% burns.
"Both were taken by the North West Air Ambulance to Wythenshawe hospital. We have had no reports of any other casualties."
In a statement, Ravenair said: "Our primary concern is for the welfare of the two persons on board the aircraft and their family and friends. 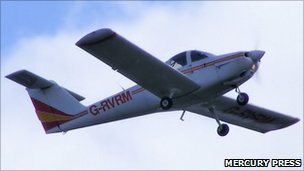 The plane was operated by Ravenair flying school
"We wish to express our gratitude and thanks to all of the emergency services and general public who assisted in the initial moments of the accident."
A spokesperson for the aerodrome said: "A Piper PA38 Tomahawk single-engine light aircraft with two people on board took off from City Airport [Barton Aerodrome] at 12:19 BST today.
"After take-off, the aircraft flew a short distance before coming down in Newlands Avenue, Salford."
One of the properties hit by the plane suffered severe structural damage, and part of it is due to be demolished as crews work to make the scene safe.
The nearby A57 was closed for several hours in both directions but reopened at 16:50.
A spokesperson for the Air Accidents Investigation Branch said a team had been deployed to the crash site and an investigation was under way.
at July 29, 2011