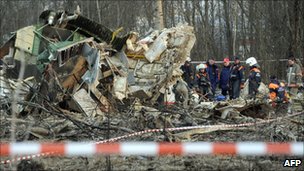 A Polish report has found that Russia was partly to blame for the air crash last year which killed then-President Lech Kazynski.
It said that pilot error was the main reason for the crash, but that air controllers and poor lighting at Smolensk were also at fault.
The crash killed 96 people and has been a source of tension between the two countries.
A Russian report released in January laid full blame on Poland.
But Poland, while accepting some of the findings, said that Moscow's report was "incomplete".
All those on board the TU-154 Tupolev, who included officials spanning the country's military and political elite, were killed when their airliner crashed while trying to land in heavy fog.
They had been on their way to a memorial for the victims of Katyn, where 20,000 Polish officers were massacred by Soviet forces in 1940.
'Erroneous information' The report by Warsaw said the pilot had lacked experience in landing aircraft in adverse weather conditions, and the crew was not adequately equipped.
It also found that airport lighting was "defective and incomplete", while a landing zone official had given "erroneous information" to the crew as they prepared to land in poor weather at the Russian city of Smolensk.
In its report earlier this year, Russia had said the crash was due to pilot error and said the crew had taken unjustified risks under pressure from their superiors.
Russia's handling of the disaster had originally been widely commended, but the issue later became a source of contention between the two nations.
Jaroslaw Kaczynski, the twin brother of the later president and opposition politician, has previously accused Prime Minister Donald Tusk's government of a cover-up with Moscow.
at July 29, 2011