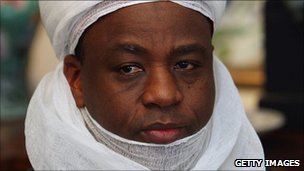 The sultan of Sokoto, the spiritual leader of Nigeria's Muslims, has condemned the military crackdown against the Islamist Boko Haram sect.
"We cannot solve violence with violence," Mohamed Sa'ad Abubakar told a meeting of religious leaders.
The Boko Haram, based in the north-eastern city of Maiduguri, says it is fighting for Islamic rule.
It has been behind recent assassinations of prominent figures and a wave of bombings.
Two years ago, Nigeria's security forces brutally suppressed an uprising by the sect, destroying its compound in Maiduguri - the capital of Borno state - and then capturing and killing its leader Mohammed Yusuf.
Instead of disappearing, the group, which opposes Western education and is fighting for Islamic rule, re-emerged last September and vowed to avenge its leader's death.
Last month, it said it had carried out an attack on the headquarters of the Nigerian police in Abuja, which killed at least six people.

But the response of the security forces has led to criticism from rights group and the governor of Borno state.
Correspondents say many residents of Maiduguri are now more scared of the army than they are of Boko Haram.
"That problem can never be solved by drafting soldiers into cities where there is [a] problem - and in the process innocent lives were lost," said the sultan, who once served as military officer.
It is the first time the sultan has spoken about the Boko Haram insurgency.
Muslim clerics who have criticised the sect have been among those targeted for assassination in drive-by shootings over the past year.
The sultan also said the five policemen who have just gone on trial this month for the killing of Mr Yusuf should not be given bail.
Boko Haram's official name is Jama'atu Ahlis Sunna Lidda'awati wal-Jihad, which in Arabic means "People Committed to the Propagation of the Prophet's Teachings and Jihad".
But residents of Maiduguri, where it was formed in 2002, dubbed it Boko Haram.
Loosely translated from the local Hausa language, this means Western education is forbidden.
Boko Haram sees such education as corrupting Muslims.
Nigeria - Africa's most populous nation - is split between the predominately Muslim north and largely Christian south.
at July 29, 2011