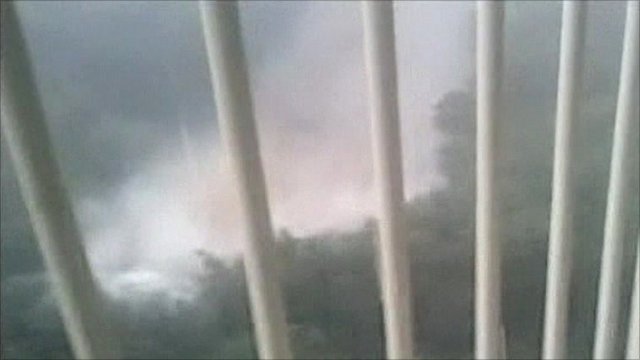 Torrential rain in South Korea has caused landslides and floods, and hit arms dumps in the north of the country.
Military officials said all weapons had been recovered after an arms depot in Yangju, near the northern border, was hit by a mudslide.
But soldiers were still searching for about 10 landmines they fear may have been washed away near Seoul.
The country has been hit by the most intense downpour for a century, leaving at least 50 people dead.
'Raise the bar' Blogs and newspaper editorials have been critical of the government - many blaming the country's fast-paced development for denuding tree coverage and worsening the chaos.
President Lee Myung-bak said no country in the world could endure such a downpour.
But he added: "We should raise the bar of safety standards to deal with such natural disasters."
Among the worst single incidents this week, a landslide on Wednesday crushed a hotel at a mountain resort in Chuncheon, east of Seoul, killing 13 people - most of them students.
And 17 people were killed when mud smashed into their homes from a mountain slope in Seoul.
Several arms dumps near the tense border with North Korea were wrecked by landslides.
And there were fears that a small number of landmines planted on a mountain near Seoul during the 1950-53 war with the North had been washed away.
Meanwhile, North Korean state news agency KCNA carried a report saying large areas of the country had been badly hit by flooding.
KCNA reported that thousands of homes and hundreds of factories and public buildings had been destroyed.
The agency said an initial survey showed more than 560 sq km (216 sq miles) of farmland had been flooded.
at July 29, 2011