Zimbabwe's plans to import US cents to help shops 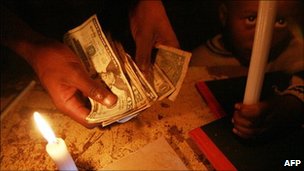 Zimbabwe hopes to import US currency coins into the country where shops are often unable to give customers change, the finance minister says.
Zimbabwe allowed trade in the US currency in 2009 after hyperinflation made its money worthless.
US dollar notes are easily available, but there is an acute shortage of cents, the BBC's Brian Hungwe in the capital, Harare, says.
Shops often barter sweets for change, he says.
Finance Minister Tendai Biti said Zimbabwe's bankers were in talks with US authorities to "import" coins.
"Efforts to import small dollar coins to ease the small change problem are continuing," Zimbabwe's state-owned Herald newspaper quotes him as saying.
"It is envisaged that the coins will be available before the end of the year," he said.
Our reporter says there has always been a shortage of US cents, causing frustration among Zimbabweans.
Often customers feel short-changed when buying goods, as they are forced to take other items - such as sweets - or run up credit with the shop, he says.
Zimbabwe also allows trade in South Africa's rand and Botswana's pula, but people prefer using the US dollar, our reporter says.
Mr Biti opened the economy to foreign currencies after he became the finance minister in 2009 in the power-sharing government formed to end the political and economic crisis in Zimbabwe.
The move helped to stop the economic free-fall in Zimbabwe, where at one stage a Z$100 trillion note was issued.
The crisis was triggered by years of conflict and economic mismanagement, blamed on President Robert Mugabe and his Zanu-PF party.
Mr Mugabe agreed to a power-sharing government with his bitter rival Morgan Tsvangirai and his Movement for Democratic Change party following elections marred by violence in 2008.
at July 29, 2011