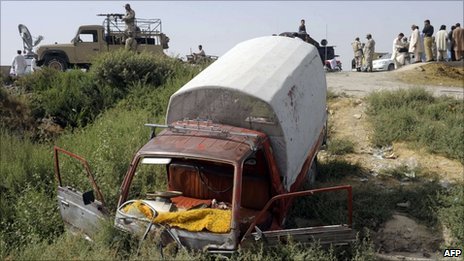 The van was sprayed with bullets
Continue reading the main story

Gunmen opened fire on a van in the city of Quetta, south-west Pakistan, killing 11 Shia Muslims in a suspected sectarian attack, police say.
Seven people were killed on the spot and four others died en route to hospital. One woman was among the dead.
The attack comes a day after gunmen killed seven Shia pilgrims at a bus stop in the city centre.
Angered by the attacks, locals from the Shia community burnt cars and offices in Quetta, capital of Balochistan.
Correspondents say the attack will add to the growing sense of insecurity among Pakistan's minority Shia community.
Brazen attack 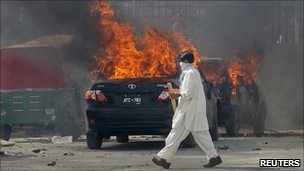 The killing sparked protests by Shia residents
The group was travelling in a packed passenger van near the outskirts of Quetta when gunmen sprayed it with bullets.
"Unidentified gunmen riding [a motorbike] opened fire at a Suzuki van carrying a group of people on their way to the main city from Hazara town," said Balochistan's police chief, Rao Amin Hashim.
The gunmen managed to escape.
There has been a notable increase in sectarian violence across Pakistan in recent years.
Islamist freed The Lashkar-e-Jhangvi, Pakistan's deadliest militant group, has said it was behind Saturday's attack.

The group has strong ties to al-Qaeda and has carried out high profile attacks against US diplomats and Pakistan military targets in the country, the BBC's Shoaib Hasan reports from Karachi, on the border of Balochistan.
But its focus remains on the Shia community - which it regards as apostates, our correspondent says.
The attack comes soon after the release of Malik Ishaq, head of the Lashkar-e-Jhangvi, after a decade in jail.
When a local journalist asked him what he now intended to do, Ishaq's reply was chilling, our correspondent says. He said his organisation would continue its "good work" - fighting those who opposed their version of Islam.
Balochistan, on the border with Afghanistan, is also fighting a regional separatist insurgency as well as Islamic militancy.
at July 31, 2011