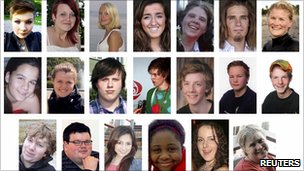 20 of the massacred. Police are still unsure if all of those missing have been accounted for
Continue reading the main story

Police say they will question Anders Behring Breivik again on Friday, to follow up new leads on the Norwegian massacre and bombing.
It will be the second interrogation for the extremist, who admits carrying out the attacks that killed 76 people.
Mr Breivik has been in solitary confinement since his court appearance on Monday.
One week after the killings, Norway's leaders will join bereaved relatives for a memorial service in Oslo.
The service has been organised by the youth movement of the Norwegian Labour party, which was the target of the shootings on Utoeya island.
The prime minister and most of his government will attend the event. The principal message will be that Norway's democracy will not be undermined by extremism. 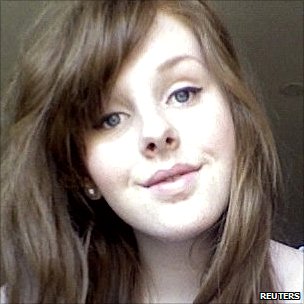 18-year-old Synne Roeyneland from Oslo is one of those newly confirmed as a victim of the 22 July massacre
As to the self-confessed gunman; in addition to answering police questions, he will also be assessed by psychiatrists.
His lawyer has claimed publicly that his client is insane.
The police called off their search of Utoeya island on Thursday afternoon, but continue to drag the surrounding lake for remains.
They also released the names of another 24 people killed. The process is taking days, because the authorities are scrupulously following a procedure of contacting relatives when they have positively identified victims.
Most were teenagers. The youngest of those named so far was Johannes Buoe, aged 14.
Two foreigners are now known to have died; one Georgian and one Danish citizen.
But the BBC's Jon Brain in Oslo says the police have admitted for the first time that they are not sure how many people are still missing.
Closed hearing Mr Breivik has claimed he acted to stem what he called the Islamisation of western Europe, blaming the government for allowing it to happen.
His next interrogation will focus on whether there is "any more danger", according to police attorney Paal-Fredrik Hjort Kraby. 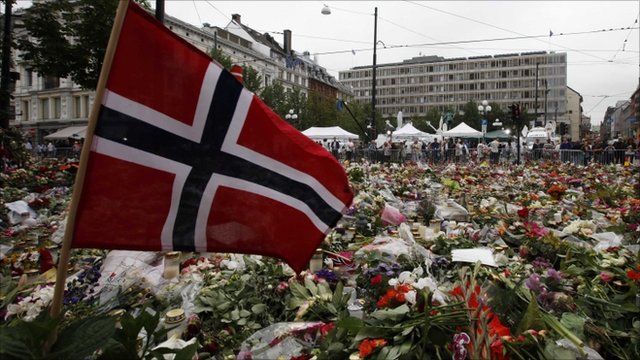 Click to play
The BBC's Jon Brain says authorities have plans to archive tributes to the victims of the Oslo attacks
Detectives want to question Mr Breivik on "information received over the last few days - which is a lot," added Mr Kraby, though he did not elaborate.
After the custody hearing on Monday, which was closed to the public, the presiding judge said Mr Breivik claimed there were two other cells working with him.
His next court hearing will be closed as well, "just in case he's able to send messages by code" to associates, said Mr Kraby.
Despite the fears, Norwegian authorities have said they believe Mr Breivik acted alone.
Norwegian domestic intelligence chief Janne Kristiansen said no evidence had so far been found linking Anders Behring Breivik with far-right extremists in Norway or elsewhere.
Norway's chief prosecutor has said he expects the indictment will not be ready before the end of the year.
Tor Aksel Busch said he hoped the trial could be held next year.
at July 29, 2011