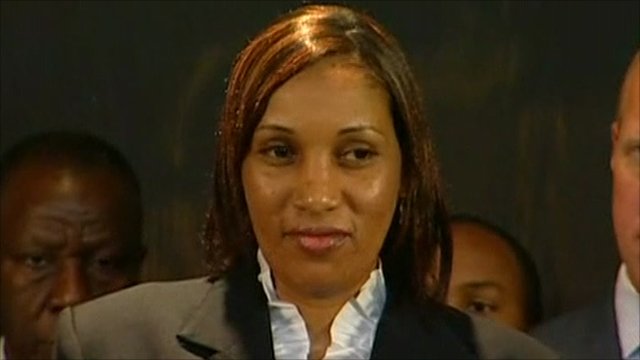 The hotel maid who accuses ex-IMF head Dominique Strauss-Kahn of attempted rape may file a civil suit if prosecutors do not press criminal charges, her lawyer says.
The Manhattan district attorney's office has publicly announced they had doubts about the credibility of Nafissatou Diallo's allegations.
Making her first public appearance, Ms Diallo spoke of the pain the case had caused her and her family.
Mr Strauss-Kahn has denied the charges.
"What she wants is justice and if the prosecutors are not going to bring this case to trial then we have to look for justice and what I look forward to is putting this case before a jury," Ms Diallo's lawyer, Kenneth Thompson told a news conference.
When pressed by journalists when he might launch this case, he said: "Soon. Soon is soon."
On Wednesday, Ms Diallo and Mr Thompson met prosecutors for eight hours.

Laura Trevelyan BBC News, New York
Flanked by her lawyer and her supporters, a tearful Nafissatou Diallo told a crowded room full of reporters and camera crews that she doesn't want other women to suffer in the way that she has.
Ms Diallo's supporters suggested race and class may be factors in the way the case had been handled, and accused the Manhattan district attorney of throwing Ms Diallo under a bus by questioning her credibility.
There's speculation that the prosecution is weighing up whether to drop the charges against Mr Strauss Kahn.
It's highly unusual for a witness in a criminal case to speak out to the media before giving an account to the jury - Ms Diallo's decision to give interviews to ABC News and Newsweek three days ago prompted legal experts to say that she was trying to put pressure on the prosecution not to drop the charges.

It was their first meeting since the Manhattan district attorney's office said it had doubts about her credibility because of false statements on her asylum application and a taped recording of a telephone conversation between Ms Diallo and a friend in an Arizona jail.
Mr Thompson said a translated transcript revealed that the conversation, the day after the alleged attempted rape, focused on what had happened to Ms Diallo, and not on Mr Strauss-Kahn's wealth.
Ms Diallo was reported to have discussed with the man how to obtain money from the French politician.
'Stop crying' Mr Thompson was speaking after Ms Diallo made a emotional public appeal for people to believe her allegations.
"A lot of things people say about me are not true," she continued.
Her daughter, she said, had told her: "You have to remember this guy is a powerful man - everybody knows that. But for you, only the people who work with you, your neighbours, the people back home, know you.
"But those people say good things about you because they know you. Please mum, stop crying, be strong for me."
She said she had promised her daughter she would be strong "for you and every other woman in the world".
"What happened to me I don't want to happen to any other woman," she said.
at July 29, 2011