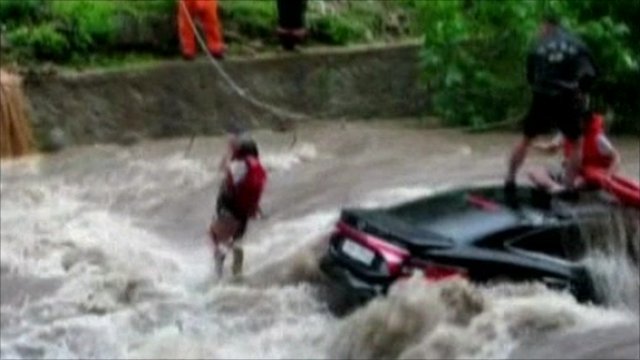 At least 32 people have been killed in landslides in South Korea, as heavy rain deluged homes and caused chaos across northern areas of the country.
A landslide crushed a hotel at a mountain resort in Chuncheon, east of the capital, Seoul, killing at least 13 people - most of them students.
Among other major incidents, 16 people were killed when mud smashed into their homes from a mountain slope in Seoul.
Forecasters say more heavy rain is likely in the coming days.
Disaster officials said most of the victims in Chuncheon were university students who had been doing volunteer work in the area.
Hotels, restaurants and coffee shops were wrecked when the landslide occurred just after midnight (1500 GMT Tuesday).
One student who survived the landslide told South Korea's Yonhap news agency: "I was sleeping on the second floor of the pension when I heard the thundering sound of a landslide. The stairs collapsed, and I was buried under mud."
Officials said two people were still not accounted for at the resort.
Hundreds of homes have been flooded in Seoul.
The torrential rain has also knocked out mobile phone signals and forced the closure of dozens of roads.
at July 27, 2011