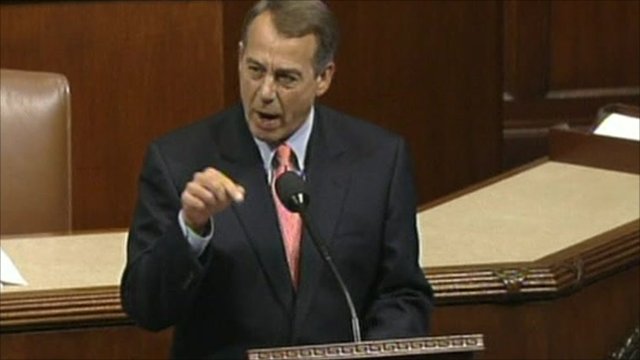 Click to play
John Boehner: ''I stuck my neck out a mile to get an agreement with the president"
Continue reading the main story

The US House of Representatives has passed a Republican bill proposed by Speaker John Boehner to increase the nation's debt ceiling.
Mr Boehner's plan passed the House by a vote of 218-210, with 22 Republicans and every Democrat voting against.
It includes $900bn of spending cuts and is not expected to pass the Democratic-controlled Senate in its current form.
The US risks defaulting on its financial obligations if a federal budget deal is not struck by 2 August.
Continued disagreements Prior to the vote, Mr Boehner told Congress the plan advanced the "great cause of a balanced budget amendment".
Mr Boehner appeared heated in front of his colleagues in the House, slamming his fist on a podium on Friday evening and calling for lawmakers to pass his proposal.

It's odds-on the president won't have to veto the Republican plan, as the Tea Party seems to have done the job for him”

Mark Mardell BBC North America editor
His plan calls for a vote on an amendment to the US constitution - a move Democrats say is certain to be rejected by the Senate.
Mr Boehner said Republicans had tried their "level best" to reach a deal.
"I stuck my neck out a mile to get an agreement with the president of the United States," Mr Boehner said, referring to negotiations with President Barack Obama that twice broke down.
"My colleagues, I can tell you I have worked with the president and the administration since the beginning of this year to avoid being in this spot," he added.
"A lot of people in this town can never say yes," Mr Boehner said.
A vote on the Republican plan was originally set for Thursday but was rescheduled for Friday evening after Mr Boehner suspected the proposal lacked support within his own party.
The US government will start running out of money to pay all its bills unless a $14.3tn (£8.79tn) borrowing limit is increased by Tuesday.
Democrats have said the Republican bill as passed would cause immeasurable damage to the economy because it would force Congress to vote on another extension of the debt ceiling early in 2012, a time when presidential election campaigns will be in full swing.
Mr Boehner's plan would reduce spending by about $900bn and raise the debt limit by nearly the same amount.
Democrats have vowed to reject the Republican bill the moment it hits the floor of the Senate.
'Out of time' Earlier on Friday, the White House said Mr Boehner was taking a dangerous approach with his proposal.
"Amend the constitution or default is a highly dangerous game to play," White House spokesman Jay Carney said.
Meanwhile, Mr Obama accused House Republicans of pursuing a partisan bill that would force Washington into another debt limit fight within months.
"There are plenty of ways out of this mess, but we are almost out of time," Mr Obama said.
"The time for putting party first is over," he added. "The time for compromise on behalf of the American people is now."
Analysts predict a last-minute scramble for a compromise and razor-edge votes in both chambers, with the high-stakes game of legislative brinkmanship expected to continue all weekend.
The president backs a proposal by Senate Democratic Majority Leader Harry Reid, which would cut $2.2tn from deficits and raise the debt ceiling by $2.7tn.
Mr Reid asked Republicans to suggest changes to his plan, saying it is "likely our last chance to save this nation from default".
The Boehner and Reid plans overlap in key ways, such as trimming spending over 10 years and shunning President Obama's call for tax increases on the wealthy and corporations.
Analysts have said international markets would be shaken if the US defaults and runs out of money to pay its bills.