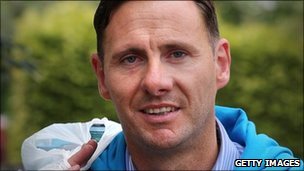 The private investigator at the centre of the News of the World phone-hacking row says he "acted on the instructions of others", his lawyers have said.
In a statement, Glenn Mulcaire's legal team said any suggestion he acted unilaterally was "untrue".
It comes as the mother of murdered schoolgirl Sarah Payne said she was "very distressed" after being told she may have been phone hacked by Mulcaire.
Then-editor Rebekah Brooks said it was "unthinkable" anyone at the paper knew.
Voicemail messages Mulcaire was jailed in 2007 after admitting to phone hacking while he was working for the paper.
The statement said: "As an employee he [Mulcaire] acted on the instructions of others.
"There were also occasions when he understood his instructions were from those who genuinely wished to assist in solving crimes.
"Any suggestion that he acted in such matters unilaterally is untrue. In the light of the ongoing police investigation, he cannot say any more."
Meanwhile, the Metropolitan Police said it is to investigate allegations of computer hacking.
A new team of officers are to join Operation Weeting, the investigation into alleged phone hacking, to investigate the claims.
In other developments:
A former police officer who worked on the Sarah Payne murder investigation said he feared his phone may have been hacked on behalf of the News of the World.
Martyn Underhill told BBC Radio 4's The World at One he had contacted police involved in the phone-hacking inquiry.

Glenn Mulcaire has already expressed his sincere regret to those who have been hurt and affected by his activities and he repeats that apology most sincerely.
He was effectively employed by News of the World from 2002 to carry out his role as a private investigator.
As he accepted when he pleaded guilty in 2007 to charges of phone interception he admits that his role did include phone hacking.
As an employee he acted on the instructions of others.
There were also occasions when he understood his instructions were from those who genuinely wished to assist in solving crimes.
Any suggestion that he acted in such matters unilaterally is untrue. In the light of the ongoing police investigation, he cannot say any more.
Statement issued by Glenn Mulcaire through his solicitor

Mr Underhill was the detective chief inspector with Sussex Police who was in charge of liaising with Sarah Payne's mother, Sara.
He claimed he was contacted by the News of the World with an untrue story about the Payne family. Mr Underhill believes it may have been based on misinterpreted voicemail messages.
He said the Metropolitan Police investigation into phone hacking had not found his number as part of any evidence but officers were still searching.
Mr Underhill said information about covert inquiries would have been left in voicemail messages on his mobile phone issued to him by the police.
'Very distressed' Speaking for the first time on Friday evening, Ms Payne spoke of her distress but said she still had faith in those who had supported her.
"I am, as you can imagine, very distressed and upset by the news that my details have been found on Mulcaire's list and would like to thank everyone for their kind words of support," she said in a statement.
"I can confirm reports that I was given a phone by the campaign team and that my voicemail was only activated after my first aneurysm.
"Notwithstanding the bad apples involved here, my faith remains solidly behind all the good people who have supported me over the last 11 years. I will never lose my faith in them."
Mrs Brooks said Ms Payne had become a "dear friend" during the News of the World's campaign for Sarah's Law.
"The idea that anyone on the newspaper knew that Sara or the campaign team were targeted by Mr Mulcaire is unthinkable," she said in a statement on Thursday.
"It is imperative for Sara and the other victims of crime that these allegations are investigated and those culpable brought to justice."
News International has said it "takes this matter very seriously and is deeply concerned like everyone".
'Maximum transparency' Commons culture, media and sport committee chairman John Whittingdale said it was another "appalling" allegation. 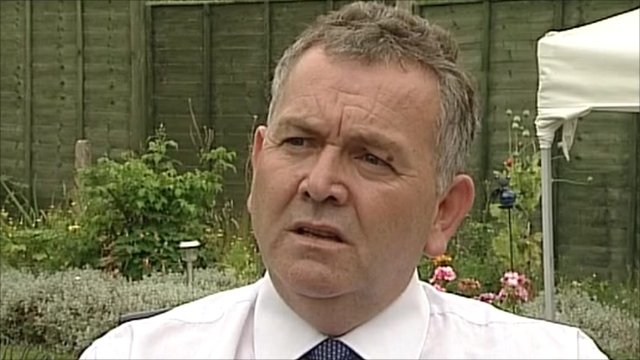 Click to play
Martyn Underhill: "I said if you print this I will sue you"
"People were very shocked to discover Sarah Payne's phone may have been hacked. Obviously to hack into a police officer's phone raises whole other questions," he said.
Prime Minister David Cameron described the hacking scandal as "shocking in terms of the dreadful things that have happened".
In a general email to Conservative Party supporters, he added: "I hope you agree that with a judge-led inquiry now being established, a proper police investigation under way, the BSkyB merger now off the agenda and maximum transparency being delivered, we have dealt decisively with this issue."
There have also been allegations that the News of the World accessed the voicemails of murdered schoolgirl Milly Dowler, relatives of victims of the 7/7 terrorist attacks and families of killed British soldiers.
Mulcaire, 40, from Sutton in Surrey, and former News of the World royal editor Clive Goodman were sentenced to six months and four months respectively in 2007 for phone hacking.
Rupert Murdoch's News Corporation announced last week it would stop paying Mulcaire's legal fees "with immediate effect".
The culture committee, which has been questioning past and present News of the World executives about phone hacking, said it might recall witnesses including James Murdoch for a second time.
Two former News of the World executives have questioned his evidence to the committee.
Mr Whittingdale said: "We want to find out more details of that and we've written to ask them to supply more information.
"Once we have that I think it's very likely we will want to put that to James Murdoch and hear his response."
at July 29, 2011