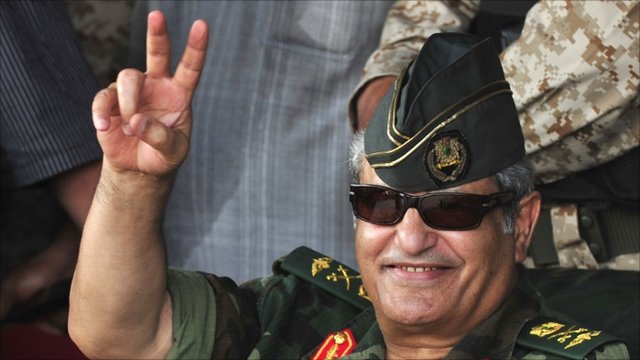 Mystery surrounds the circumstances of the killing of Libya's rebel military commander, Gen Abdel Fattah Younes, a day after he and two aides were shot.
Rebel leader Mustafa Abdul-Jalil said they had been killed by gunmen after Gen Younes was recalled from the front for questioning by judges.
He said the ringleader of the attack had been held but he gave no details about his identity or the motive.
It is not disclosed where the attack happened; nor where the bodies are.
The general - a former interior minister who had served at the heart of Col Muammar Gaddafi's regime since the 1969 coup - joined the rebels at the beginning of the Libyan uprising in February.

James Reynolds BBC News, Tripoli
There are a lot of questions about exactly what happened on Thursday and what the sequence of events was. We're told that Gen Younes had been due to appear before a panel of rebel judges to answer a number of questions on a military matter. We're not entirely sure what that was.
In a conflict like this where there are not many facts and one side of the country is fighting another, we tend to get an awful lot of rumours and suggestions.
For what it's worth, some of the ones we're hearing is that there was a worry among the rebels that the military campaign was not going very well. They wanted to question the general.
Some of the speculation we're hearing in Tripoli, coming from Col Gaddafi's side, is that the general was simply not trusted by the rebels.

The BBC's Ian Pannell in the rebel-held city of Misrata says his defection was seen as a coup for the opposition, but there had been rumours that he had kept contacts with the Gaddafi leadership.
Mr Jalil announced the general's death late on Thursday, and said the head of the group of men who killed him had been captured.
Mr Jalil, who heads the rebel National Transitional Council, did not say who the assailants were or where the attack took place.
Although the bodies of Gen Younes and his aides have not been found, Mr Jalil said there would be three days of mourning in their honour.
Gen Younes was due to appear before a panel of judges in the rebel capital, Benghazi.
The exact nature of the questions he was facing is also unclear. Mr Jalil said they regarded military operations.
Some unconfirmed reports said Gen Younes and two aides had been arrested earlier on Thursday near Libya's eastern front.
Shortly after the announcement of their death, gunmen entered the grounds of the hotel in the eastern city of Benghazi where Mr Jalil was speaking, reportedly firing into the air before being convinced to leave.
Ddivisions in Benghazi 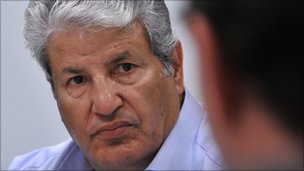 Earlier on Thursday, rebels said they had seized the strategically important town of Ghazaya near the Tunisian border, after heavy fighting with Col Gaddafi's forces.
They reportedly took control of several other towns or villages in the area.
The rebels are struggling to break a military deadlock five months into the uprising against Col Gaddafi's rule.
Rebels control most of eastern Libya from their base in Benghazi and the western port city of Misrata, while Col Gaddafi retains much of the west, including the capital, Tripoli.
Late on Thursday AFP news agency reported explosions shaking the centre of Tripoli, as state TV reported that planes were flying over the Libyan capital.
Nato, acting under a UN mandate authorising military action for the protection of civilians, has carried out regular air strikes in the Tripoli area.
Our correspondent says his death will feed international suspicions that the rebel cannot be trusted.
South Africa's ambassador to the UN on Thursday warned that supporters of the rebels were in danger of violating UN sanctions and criticised calls by Western governments for Col Gaddafi to stand down.
The BBC's Barbara Plett at the UN says the growing trend to grant diplomatic recognition to the Libyan rebels is facing opposition on the Security Council.
About 30 countries have recognised the NTC.
at July 29, 2011