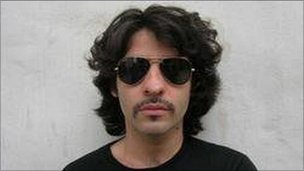 Zeid Hamdan was accused of insulting the president in his lyrics
Lebanon has freed singer Zeid Hamdan, detained on Wednesday over a song deemed insulting to President Michel Suleiman, a former army chief.
Slandering the president carries a maximum two-year sentence in Lebanon. Officials reportedly took exception to the lyrics: 'General go home'.
A Facebook campaign calling for his release has attracted 2,500 supporters.
Some reports say the presidency heard of the Facebook group and ordered his release but that was officially denied.
'Bit of advice' It was four years ago that Zeid Hamdan decided to write a song about President Suleiman, former commander-in-chief of the Lebanese Armed Forces.
He has performed the song ever since and last year an Italian director made a video of it and posted it on a DVD to a Lebanese advertising agency.
That is when the problems began. A vigilant customs officer watched it and there was one line he didn't like.
"At the end of the song, I say 'General go home'," Hamdan told the BBC.
"[The authorities said] it's the worst thing you can tell him, you are asking him to leave power. So it's worse than an insult," he recalled.
Hamdan explained that it was not an insult - just a bit of advice. Unconvinced, the officials asked him to three interrogations, including one on Wednesday morning, when he was arrested.
As he was put into handcuffs, Hamdan managed to pass his mobile phone to his lawyer.
"I gave him my Facebook code and asked him to do an announcement to my Facebook profile, which he did. People created a group to release me and in a few hours I had 2,000 people.
"Somehow most of my friends were very active and helped the noise to spread."
By the end of the day, a judge called him from his cell and ordered that he be freed.
"He said call your parents and he told me sarcastically - go home."
at July 29, 2011