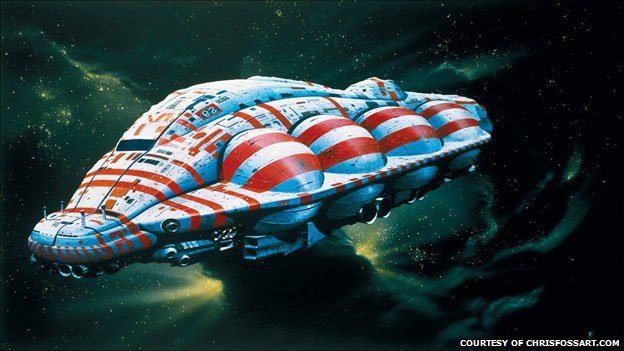 As the next generation of spaceships is being conceived, should shuttle designers take their inspiration from sci-fi illustrators?
Generations of schoolchildren, openly, and many adults, perhaps more guardedly, have delighted in fantastical depictions of space travel.

From Star Wars back to 2001: A Space Odyssey and even further back to comic hero Dan Dare and Victorian illustrations for the stories of Jules Verne and HG Wells, the way spaceships should look has been an important issue - before the first rocket booster ever fired.
But the fanciful reputation of sci-fi novels and films aside, the illustration of spacecraft might actually have a realistic place in the design of future vessels.
The line has often been blurred between the realm of the sci-fi artist and the real spacecraft designers.
Often referred to as the father of modern space art, Chesley Bonestell had a significant impact on not only science fiction illustration, but the whole of the American space programme.
German rocket developer and champion of space exploration Dr Wernher von Braun, who was inspired by the works of Verne and Wells, commissioned Bonestell to illustrate his spaceflight concepts in a 1952 issue of Collier's Weekly magazine. 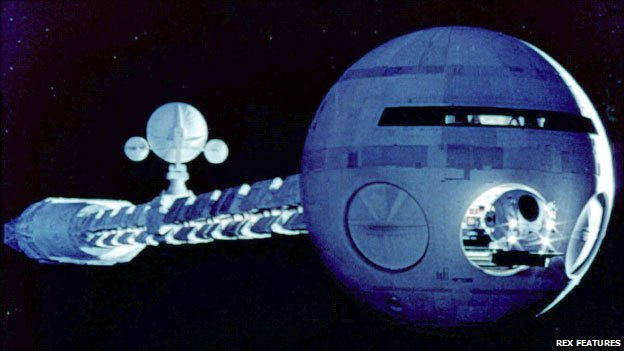 The epic film 2001: A Space Odyssey influenced Chris Foss and other space artists
The combination of von Braun's technology and Bonestell's artistic vision made the science come alive for the layman readers. Of course, the tax dollars and votes of those inspired layman readers would be needed to realise ambitious space projects.
The Association of Science Fiction & Fantasy Artists now honours work in the sci-fi and fantasy art industry with its annual Chesley Awards.

End Quote Dr Gary Westfahl Science fiction academic
Harry Lange was a German artist who got his start in military flight manual illustrations and was appointed to lead the future projects section for Nasa. He and his team found themselves illustrating von Braun's ideas to promote his vision of a US space station. Lange ended up as production designer on Stanley Kubrick's 2001.
On the other hand it's hard to imagine the designs of Chris Foss, the subject of a new retrospective book, Hardware: The Definitive SF Works of Chris Foss, easily crossing the line into the real world of space travel. With Picasso as an inspiration, Foss created book covers that pioneered a new style of space art, featuring prominently placed gigantic colourful craft in swirling spacescapes.
Marked with mysterious symbols and complex patterns, his illustrations have breathed life into sci-fi writings of everyone from Isaac Asimov to EE "Doc" Smith and AE van Vogt. Foss was also commissioned to do work for Alien, Superman and Alejandro Jodorowsky's unmade film version of Dune.
Seeing Kubrick's 2001 made a lasting impression on his work, as did the Cold War years and the bleakness of some of the derelict areas of post-war Britain. "People were really looking for a new kind of explosion," says Foss. "Humans want hope. They want something to believe in."
So is it fanciful to imagine Foss's ships - or those of equally florid artists - being like Bonestell's and infiltrating real design?
Perhaps not if a new age of privately-financed space travel needs to rally support in the same way von Braun and Bonestell did. 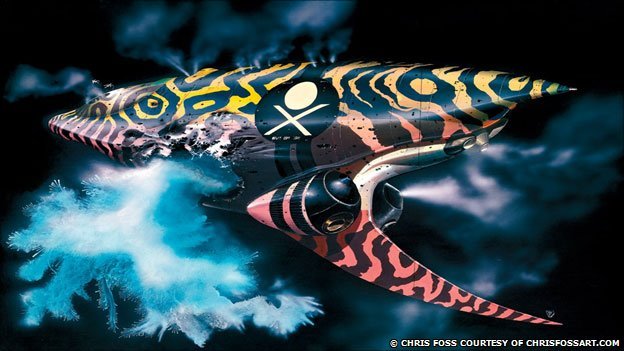 The end of the space shuttle programme presents a new challenge for spacecraft engineers and designers - one that could even benefit from collaboration with artists.
With government funding constricted, many will be looking to private investors to lead the future of space vessels.
More and more, the aim of companies, such as Boeing, will be to entice consumers to pay for space travel. Just as airlines have done, they will have to appeal to potential passengers - and investors - in order to establish their brands against the competition.
"An enterprising company seeking to attract government and private passengers might achieve success by offering them spaceships that resembled the unique visions of Chris Foss," says science fiction academic Dr Gary Westfahl.
Exotic design might play a part similar to that of airline insignia - from Alaska Airlines' themed craft to Aer Lingus's shamrocks. The goal is to establish brand recognition and visual appeal.
"Foss made his spaceships beautiful not by streamlining them but by adding bright, decorative colours," says Westfahl. 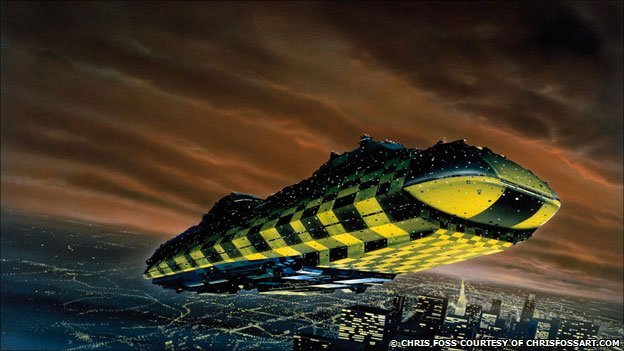 Some might find it strange that a Nasa worker like Lange could make the jump from a deep space project to Hollywood and end up with Oscar nomination for the art direction on The Empire Strikes Back.
But space is a particularly romanticised part of our vision of exploration, says Dr Eric Rabkin, a professor of English at the University of Michigan who specialises in science fiction.
It's because of the unknown, he says. Trains must go where tracks have previously been laid down and planes have to fly where they can ultimately land.
"Ships are inherently romantic because they can go where no one has before. Ships are associated with freedom and conquest," says Rabkin.
at July 28, 2011