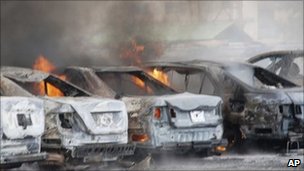 Nigeria's government says it wants to start negotiating with Islamist group Boko Haram, which has been blamed for a series of recent attacks.
The government said a panel would open talks with the group and report back by 16 August.
There was no immediate reaction to the statement from Boko Haram.
The group, whose name roughly translates as "Western education is forbidden", is fighting to topple the government and create an Islamic state.
It led an uprising across a number of states in northern Nigeria in 2009, during which hundreds were killed.
In recent weeks it has been blamed for a series of bombings and shootings in Nigeria's north-east.
The government statement said President Goodluck Jonathan had appointed seven people, including the ministers of defence and labour, to a negotiation committee.
It said the panel's role would be to act "as a liaison between the federal government ... and Boko Haram and to initiate negotiations with the sect".
It would also work with Nigeria's national security adviser to ensure that security forces acted with "professionalism", the statement added.
The governor of the Nigerian state of Borno has admitted that the army has been guilty of excesses during operations to counter Boko Haram.
Most of Boko Haram's recent attacks have been carried out in the Borno city of Maiduguri.
It also claimed responsibility for the deadly bombing of the police headquarters in the Nigerian capital, Abuja, last month.
The negotiation panel is to be inaugurated on Tuesday.
at July 31, 2011