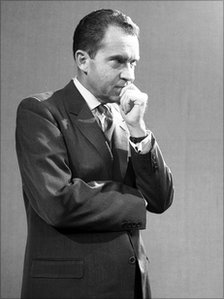 The secret grand jury testimony given by former US President Richard Nixon over the Watergate scandal is set to be released after more than 36 years, following an order by a federal judge.
Judge Royce Lamberth granted a request by historian Stanley Kutler to release the transcript, citing of its historical significance.
But it will not be unsealed until the government has had a chance to appeal.
The political scandal prompted Nixon to resign in 1974.
Nixon, who died 17 years ago, was the only US president to resign.
He left office amid the fallout after a break-in at the Democratic National Committee headquarters at the Watergate complex in Washington.
Nixon testified for two days in California in June 1975, 10 months after his resignation.
Judge Lamberth ruled that the historical interest in the 297-page transcript far outweighed the need to keep the records secret.
Watergate's "significance in American history cannot be overstated," Judge Lamberth wrote.
"The disclosure of President Nixon's grand jury testimony would likely enhance the existing historical record, foster scholarly discussion and improve the public's understanding of a significant historical event," he said.
Mr Kutler, a professor from the University of Wisconsin, has written several books about Nixon and Watergate and has previously successfully sued to force the release of audio recordings Nixon secretly made in the Oval Office.
"Nixon knew when you testified before a grand jury you exposed yourself to perjury, so I'm betting he told the truth," Mr Kutler said.
"Now, what did he tell the truth about? I don't know."
at July 29, 2011