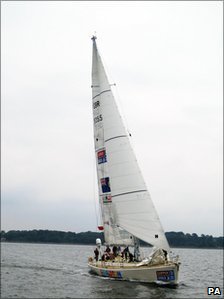 The Geraldton Western Australia is one of 10 yachts aiming to win
Ten identical yachts are set to sail from Southampton to begin the 40,000-mile Clipper round-the-world race.
The Royal Navy aircraft carrier HMS Illustrious will wave off the fleet on Sunday afternoon.
More than 500 amateur sailors from 40 countries will take turns to sail the yachts across six continents.
Nearly half of those taking part had no sailing experience before beginning their training for the race, which takes nearly a year to complete.
Among them is Martin Woodcock, from Fleet, Hampshire, who said: "Clipper have set it up as a race, which is a key part of the whole thing.
"It's not a jolly around the world for a bunch of amateurs. There's no great prize at the end of it, but obviously there's the kudos.
"This kind of opportunity is a very rare thing for an amateur sailor."
'Lifelong dream' Another taking part is Lucia Ainsworth, 45, originally from Brighouse, West Yorkshire, who has given up her job at Lloyds Banking Group in London.
She has joined the Gold Coast Australia yacht skippered by Rich Hewson for the first half of the race.
"To take part in this, the greatest amateur yacht race, will fulfil my lifelong dream to sail across oceans," she said. 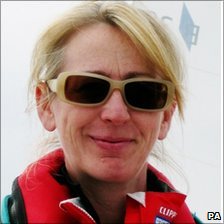 Lucia Ainsworth wanted to inspire her young relatives by taking part
"I have resigned from my job and taken a year out not only to take part in the race but to travel in Australia and New Zealand.
"As well as fulfilling my own ambitions I wanted to inspire my young nephews and nieces."
The yachts will sail with HMS Illustrious at 13:30 BST in time for the start of the race, off the Royal Yacht Squadron Line in Cowes at 16:30 BST.
The founder and chairman of the Clipper Race is Sir Robin Knox-Johnston, who was the first man to sail solo and non-stop around the world.
He spoke to the crews on the eve of the race and said: "Remember how powerful the sea is, treat it with huge respect at all times and that way you will come back safely.
"This first leg alone is more than 6,000 miles which is the equivalent to two years for an average sailor. So you're going to become very experienced sailors very quickly."
The competition is the world's longest yacht race, with participants taking almost a year to circumnavigate the globe.
The fleet of 10 identical 68ft (20m) ocean racing yachts and 10 skippers are supplied by the race organisers. Each yacht is sponsored by a city, region or country.
Participants, many of whom are sailing novices, come from all walks of life and undergo a four-stage training programme to prepare them for the gruelling journey.
The first leg will involve crews sailing from Europe to Brazil.
at July 31, 2011

Thanks for this very useful info you have provided us. I will bookmark this for future reference and refer it to my friends. More power to your blog.