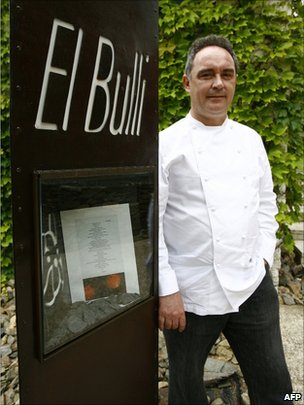 A Spanish restaurant repeatedly voted the best in the world has served its final dish to the public and is closing its doors for the last time.
El Bulli, owned by award-winning chef Ferran Adria, will mark the end of a remarkable 27-years with a special sitting for staff and their families.
The eatery, in the town of Roses, has topped a renowned World's 50 Best Restaurants list a record five times.
Mr Adria said El Bulli would re-open but as a culinary think-tank in 2014.
"El Bulli is not closing, it is transforming itself, because its soul is going to remain," he told students in Valencia earlier this month.
The restaurant, which specialised in molecular gastronomy, opened for only six months of the year and, despite its reputation, never turned a profit.
Mr Adria said the final sitting would be a tribute to all those who helped make the restaurant so prestigious.
The last menu would be secret, Spanish news agency EFE reported.
The restaurant was unconventional in many respects - it was shut for lunch to give staff time to develop new dishes - and reservations in the 50-seat venue were acquired mostly by lottery.

A Selection of El Bulli Dishes

Dinner consisted of a set menu comprising some 40 small dishes costing about 250 euros (£220).
It was five times named best restaurant in the world by the San Pellegrino World's 50 Best Restaurants produced by Restaurant magazine, based on the opinions of some 800 chefs, critics and industry experts.
The accolade though was not one with which Mr Adria entirely concurred.
"It is not the best restaurant in the world because that does not exist," he said last week, "but it is today the most influential place in the world in terms of cuisine, and especially when it comes to creativity."
On Sunday El Bulli will relaunch as the El Bulli Foundation, a centre of research into new cooking techniques and flavours.
at July 30, 2011