Comments (751)
It may be 10 years since the attacks in the US on 11 September, but conspiracy theories have not faded over time, says Mike Rudin.
Numerous official reports have been published since the Twin Towers fell, but just when a piece of evidence casts doubt on one theory, the focus then shifts to the next "unanswered question".
Here are five of the most prominent 9/11 conspiracy theories circulating in online communities.


1. Failure to intercept the hijacked planes

The question: Why did the world's most powerful air force fail to intercept any of the four hijacked planes?
Conspiracy theorists say: The then US Vice President Dick Cheney ordered the military to stand down and not to intercept the planes. 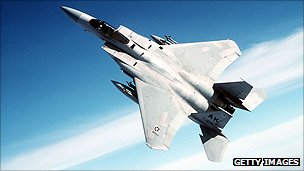 Fighter jets failed to intercept the hijacked planes
Official reports say: This was a highly unusual multiple hijacking with violence on board, and where the transponder, which provides the exact location of the plane, was turned off or changed.
What is more, a routine military training exercise happened to be taking place that day at US air defence command.
Air traffic controller Colin Scoggins was in constant contact with the military and did not see any lack of response. There was confusion and a lack of communication between the civilian air traffic control (FAA) and the military.
The military's equipment was also outdated and designed to look out over the ocean to deal with a Cold War threat.


2. Collapse of the Twin Towers

The question: Why did the Twin Towers collapse so quickly, within their own footprint, after fires on a few floors that lasted only for an hour or two?
Conspiracy theorists say: The Twin Towers were destroyed by controlled demolitions. Theories relate to the rapid collapse (about 10 seconds), the relatively short-lived fires (56 minutes in World Trade Center 2 or 102 minutes in World Trade Center 1), reports of the sounds of explosions shortly before the collapse, and the violent ejections that could be seen at some windows many floors below the collapse. 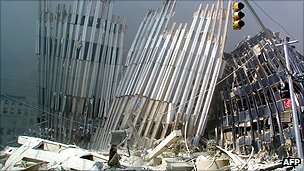 Five new skyscrapers are being built on the World Trade Center site
Official reports say: An extensive inquiry by the National Institute of Standards and Technology concluded that the planes severed and damaged support columns and dislodged fire-proofing.
Around 10,000 gallons of jet fuel were spewed over many floors starting widespread fires. Temperatures of up to 1,000C caused the floors to sag and the perimeter columns to bend, causing the sounds of "explosions".
The massive weight of the floors dropped, creating a dynamic load far in excess of what the columns were designed for. Debris was forced out of the windows as the floors above collapsed.
Controlled demolition is always carried out from the bottom floors up, yet this collapse started at the top.
No evidence has ever been found of explosive charges despite the extensive hand searches and there is no evidence of any pre-cutting of columns or walls, which is routinely carried out in a controlled demolition.


3. Attack on the Pentagon

The question: How could an amateur pilot fly a commercial plane in a complicated manoeuvre and crash it into the headquarters of the world's most powerful military, 78 minutes after the first report of a possible hijack and leave no trace? 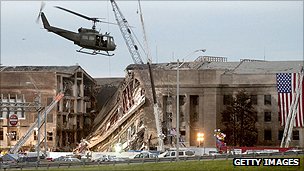 A memorial in the grounds of the Pentagon marks the deaths of those who died when Flight 77 crashed
Conspiracy theorists say: A commercial Boeing 757 did not hit the building but instead a missile, a small aircraft or an unmanned drone was used. But since evidence has increasingly shown that the American Airlines Flight 77 did hit the building, the emphasis has shifted to questioning the difficult approach manoeuvre. It is argued it was not under the control of al-Qaeda but the Pentagon itself.
Official reports say: Airplane wreckage, including the black boxes, were recovered from the scene and they were catalogued by the FBI.
Although some early video did not show much wreckage, there is a good deal of video and still photography which shows plane wreckage and evidence of the flight path, such as broken lamp posts.
The remains of crew and passengers on the plane were found and positively identified by DNA. Witnesses also saw the plane strike the Pentagon.

The question: Why was the crash site at Shanksville, Pennsylvania, so small and why was the aircraft debris not visible?
Conspiracy theorists argue: United Airlines flight 93 was shot down by a missile and disintegrated in mid air, scattering the wreckage over a large area. 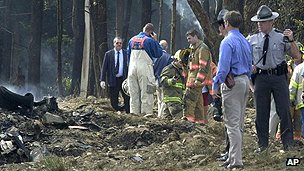 Forty-four people died when Flight 93 crashed in Shanksville, Pennsylvania
Official reports say: There are clear photographs showing aircraft wreckage and the cockpit voice recorder, which showed there had been a passenger revolt and the hijackers had deliberately crashed the plane.
Initial theories that heavy debris was scattered many miles from the main crash site turned out to be false. In fact the wind had blown light debris such as paper and insulation just over a mile.
Another theory was based on a misquote from the local coroner, Wally Miller, who said he stopped being a coroner after about 20 minutes because there were no bodies. What he also said was that he quickly realised it was a plane crash and there would have to be a large funeral service for the many victims.
In addition, the military never gave orders to the air force to shoot the commercial airliner down.

The question: How could a skyscraper, which was not hit by a plane, collapse so quickly and symmetrically, when no other steel-framed skyscraper has collapsed because of fire? 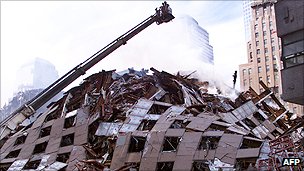 Offices for civil emergencies, the CIA and the Secret Service were based in World Trade Center Building 7
Conspiracy theorists say: The World Trade Center Building 7 was destroyed by a controlled demolition using both explosives and incendiaries.
Initially the focus was on the phrase "pull it" used by the owner, Larry Silverstein, in a TV interview. But in fact he was talking about pulling firefighters back. (Demolition experts do not use the term "pull it" as slang for setting off explosives.)
Now the focus has shifted to the speed of the collapse which reached near free fall for 2.25 seconds. It is argued only explosives could make it collapse so quickly and symmetrically.
Some scientists, who are sceptical of the official account, have examined four dust samples from Ground Zero and claim to have found thermitic material which reacts violently when heated up. They claim tonnes of thermite and conventional explosives were rigged inside, not just WTC7, but also the Twin Towers.

Official reports say: A three-year investigation by the National Institute of Standards and Technology concluded that the building collapsed because of uncontrolled fires, started by the collapse of the nearby North Tower, and which burnt for seven hours.
The mains water feeding the emergency sprinkler system was severed. No evidence has ever been found of explosive charges and there are no recordings of a series of very loud explosions that would have been expected with controlled demolition.
Furthermore, there is an alternative explanation for the "thermitic material" the sceptical scientists found in the dust - it is just a type of primer paint. It's calculated 1,200,000 tonnes of building materials were pulverised at the World Trade Center and most minerals are present in the dust (not necessarily in a large quantity). More extensive sampling of the dust has not found any evidence of thermite or explosives, says a report from the US Geological Survey and another from RJ Lee.
Your comments (751)
at August 29, 2011

I'm curious to find out what blog platform you happen to be utilizing? I'm
experiencing some small security problems with my latest website and I'd like to find something more secure. Do you have any solutions?

I used to be able to find good advice from your content.

I was recommended this blog via my cousin. I'm not positive whether this put up is written by way of him as nobody else realize such specific approximately my problem. You're amazing!
Thank you!