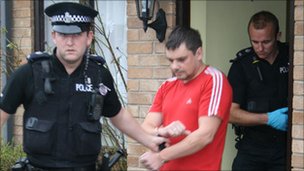 A man at the centre of a human trafficking and prostitution ring in Norfolk has been jailed for 11 years by a judge at Norwich Crown Court.
Nerijus Lekecinskas, 34, of Meadowland Drive, Bradwell, had been found guilty of trafficking a young Lithuanian woman before forcing her into prostitution.
Another man, Skirmantas Kvedaras, 47, formerly of Issacs Road, Great Yarmouth, was jailed for six years.
Both he and Lekecinskas were found guilty on one count of rape.
'Sex slave'
Both men were found not guilty on another rape charge.
Sentencing Lekecinskas, Judge Alasdair Darroch said: "This is a very serious and upsetting case involving the exploitation of a very vulnerable young woman who had to show a lot of courage to come forward.
"She was treated as a sex slave."
It was, he said, a commercial enterprise of "a most evil nature".
Sentencing Kvedaras, he said: "He took advantage of a vulnerable young woman in the hope that she would not report him."
During the trial the court heard how the victim was brought to the UK in May 2010 and collected from Gatwick airport by Lekecinskas.
She was driven to Luton before being brought back to Great Yarmouth where she was raped.
'Cold, sinister person'
Andrew McGee, for Lekecinskas, said his client still maintained his innocence and denied he was callous, as described in a pre-sentence report.
Katharine Moore, defending Kvedaras, said her client had become dependent on alcohol after his wife died in 2008 and had moved to the UK to work.
After the case Det Ch Insp Rickie Botwright said: "I'm very pleased with the sentences issued today which go some way in reassuring the victim as well as sending out a clear message to those involved in people trafficking.
"Lekecinskas presents himself as a calm individual but behind the exterior is a cold, sinister person capable of causing extreme misery.
"From the moment his victim entered the country he had strict control over her movements by placing her in accommodation where she was intimidated and constantly watched and followed."
Altogether eight people were arrested in October 2010 as part of Operation Feed.
It followed a 10-month investigation centred on people trafficking and prostitution.
at August 31, 2011