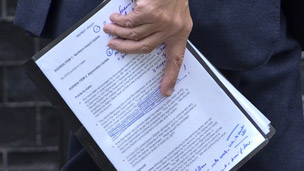 Andrew Mitchell was snapped as he left No 10 (PIC: Political Pictures)
Continue reading the main story

A senior minister has accidentally revealed a UK government briefing document "welcoming" the departure of Afghan President Hamid Karzai.
International Development Secretary Andrew Mitchell was photographed clutching the note as he left No 10.
It said the UK should "publicly and privately" approve Mr Karzai's decision not to seek a third term in 2014.
In response, Foreign Secretary William Hague said the memo was "pretty low level", adding "these things happen".
Mr Mitchell was photographed leaving Downing Street following a meeting of the National Security Council - in which ministers discussed Libya, Afghanistan and a range of other issues.
The BBC's Political Correspondent Robin Brant said Mr Mitchell immediately realised he had mistakenly displayed confidential briefing papers and told an aide "it is nothing top secret".
'Routine'
The document says: "Note that Karzai has publicly stated his intention to step down at the end of his second term as per the constitution. This is very important. It improves Afghanistan's political prospects very significantly. We should welcome Karzai's announcement in private and in public." 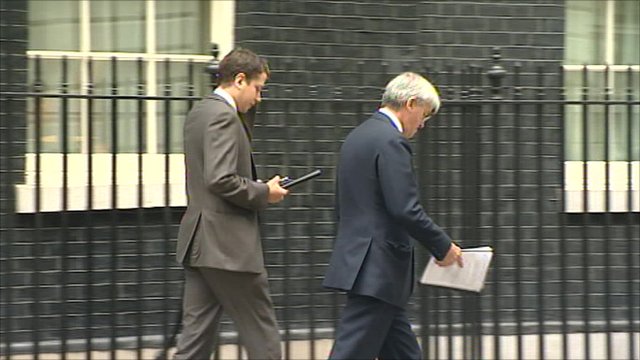 Click to play
William Hague says Mr Mitchell was carrying a "low level briefing document"
It goes on to say: "Afghan perceptions of violence are very important for their confidence in their future, and for their readiness to work for the Afghan government.
"Have we got the strategic communications on levels of violence right?"
The document also discusses reforms to Afghanistan's banking sector and a planned IMF visit to the country.
The Department for International Development said the papers were "of a routine nature".
"They would have had a national security level marking of 'restricted' or 'confidential' if they contained anything of significant sensitivity," a spokesman said.
Mr Karzai was controversially re-elected to a second five-year term in 2009 after an election which was marred by allegations of fraud and vote-rigging.
Troubled relationship
Under the terms of the Afghan constitution, Mr Karzai is not allowed to stand for a third term - which means he will stand down in 2014.
There had been speculation he would try to continue in office beyond that date but he has confirmed he will not be seeking a third term.
Asked about Mr Mitchell's disclosure, Mr Hague said the memo was a "pretty low level briefing document within one department" and President Karzai had already made his intentions clear.
He added: "Of course we always look to presidents of a country, of all countries, to respect the constitution of their countries. It is as simple as that."
Mr Karzai was controversially re-elected to a second five-year term in 2009 after an election which was marred by allegations of fraud and vote-rigging.
The Afghan leader's relationship with the UK and US has often been fraught, with critics urging him to do more to tackle corruption within his government.
But Nato forces in Afghanistan have said significant progress is being made in building up the capacity of the Afghan army and police as they take over greater responsibility for security.
The UK plans to withdraw the majority of its 9,000 troops from Afghanistan by the end of 2014, when its combat mission will come to an end.
Mr Mitchell is not the first person to be caught unawares by photographers outside No 10.
Former senior Metropolitan Police officer Bob Quick was mistakenly revealed a secret terrorism document as he arrived at Downing Street in 2009.
He subsequently resigned, saying his position was "untenable".
In other similar cases, Treasury minister Danny Alexander was pictured last year holding a memo detailing the forecast scale of public sector job cuts while, in 2009, the then Labour Cabinet minister Caroline Flint inadvertently displayed a document which talked of a "property crisis".
at August 30, 2011