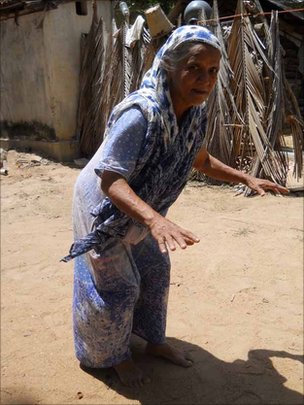 Mrs Faris imitates the loping gait of the "grease devil" intruder.
A few nights ago Tuan Mohamed Saleh Nona Faris heard a rustling outside her house and saw a shadow move.
"He looked like a gorilla, he was completely covered in black from top to toe. I couldn't see his face or hands," the elderly lady in the west coast fishing district of Puttalam said.
She believes the intruder was one of Sri Lanka's notorious "grease devils".
Over the last few weeks large swathes of the country have been gripped by a fear of nocturnal prowlers who have frequented rural areas assaulting women at night.
The media and the public were swift to dub the intruders "grease devils". This is an old caricature referring to malevolent men who smear themselves in grease to avoid being caught.
But this wave of violence has spawned a series of brutal retaliatory vigilante attacks. People have been killed, there have been arrests by the hundred and tanks have been deployed.
There are conspiracy theories: villagers blame the security forces for launching and even fostering the grease devil assaults. They deny the charges, but violence has continued unabated.
It is a confusing situation in a febrile atmosphere - and no-one has got closer to working out who is actually behind the wave of assaults.
And there appears to be an ethnic dimension too: almost always, those reporting attacks from "grease devils" have been Muslim or Tamil rather than from the majority Sinhalese community.
Blood ritual?
Some of the descriptions of the intruders seem to merge fact with fantasy.

To catch them, you'd need springs on your feet”

End Quote Villager in Puttalam
Meeting us at her home, Mrs Faris, who is a Muslim, seems edgy. After all, in Puttalam over the last few days a policeman has been lynched and villagers shot.
She called her son, who attacked the mystery intruder with a stick. It broke in two. They chased him but he leapt over the compound fence and escaped, apparently by motorbike.
A male neighbour said there had been 12 such incidents within the past week. "To catch them, you'd need springs on your feet," he said.
There is ambiguity about the nature of these intruders. Mrs Faris says she is afraid because of stories that some criminals are seeking female blood for ritual purposes. A government minister says that in some places people attribute "bionic" or superhuman powers to the intruders. 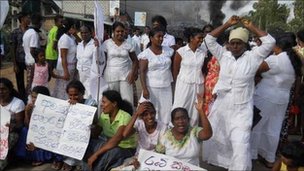 At the funeral of the lynched policeman black smoke billowed high as tyres were burnt.
But these two villagers largely reject outlandish explanations. "He looks like a gorilla but he's a man," says Mrs Faris.
In Puttalam shops were closed and white flags fluttered in tribute to a 23-year-old traffic policeman lynched by a mob who accused the police of harbouring a "devil." In reality this was apparently a drunken fisherman he had apprehended.
But on street corners, tanks are now deployed with soldiers carrying AK-47 rifles.
When people demonstrated in Mrs Faris's village and burnt a police motorbike, they were shot at, allegedly by the police. Her two grandsons are injured and in hospital. More than 30 other young men have been arrested.
Lynching and vigilantes
People have tended to blame the security forces for sheltering those they insist are criminals. Typically they say the intruder is seen running to a military or police compound for refuge.
In the central highlands, two outsiders have been lynched. On Friday a 16-year-old boy was shot dead "over alleged suspicious behaviour", according to a local website. In the north, 95 people accused of vigilantism were arrested and some - reportedly - so badly beaten that they were sent to hospital.

The Muslim people have left - they're afraid - I feel for them because it's their holy month, it's their festival”

End Quote T Premasiri
In the east many people say they have been stabbed, nearly strangled, sexually assaulted or otherwise injured by the "devils".
Campaigners for women's rights told a meeting in Colombo that in the east, women and girls have been attacked outdoors. They are now afraid to stay out late and some men, not wanting to leave them alone, have stopped going out to work.
"A prevailing sense of fear is pervading all these areas," said Sepali Kottegoda of the Women and Media Collective.
Equally concerned, the defence secretary Gotabhaya Rajapaksa held a meeting with Muslim imams flown in from the east.
He sternly warned of "maximum punishment" for anyone taking the law into their own hands.
But, speaking to the BBC, some imams were critical of the military and its allegedly vengeful behaviour.
Soured relations
The "grease devils" affair remains a mystery. Some insist it is some kind of government plot; others believe it is a spike in crime - or a figment of people's imagination. 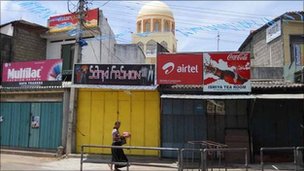 Shops had shut across the town of Puttalam after the lynching of the policeman
But it has soured social relations.
At the funeral of the lynched policeman black smoke billows as tyres are burnt. A military helicopter hovers overhead as crowds of Sinhalese mourners demonstrate against the police's failure to protect one of their own. Some chant anti-Muslim slogans.
But back in Mrs Faris's village, the atmosphere is different - sympathy across the ethnic divide.
A lot of the arrested youths come from there. One of the few people we see is a young carpenter, T Premasiri, whose family is one of only five Sinhalese ones with more than 300 Muslim families as neighbours.
He is sympathetic to his Muslim friends: "The Muslim people have left - they're afraid."
"I feel for them because it's their holy month, it's their festival. They can't even eat. And even if they cook I don't think they will be in the mood to eat."
at August 31, 2011

This is really attention-grabbing, You're a very professional blogger. I have joined your feed and sit up for searching for extra of your magnificent post. Also, I've shared your site in my
social networks

You are so awesome! I don't believe I've truly read through anything like
that before. So good to find another person with some genuine thoughts on this
topic. Seriously.. thank you for starting this up. This web site is one thing that is needed on
the web, someone with a bit of originality!