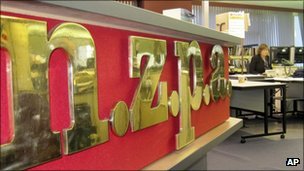 Lucy Wilkins BBC News
I worked as a young journalist at NZPA for four years, almost straight out of journalism college. It gave me broad experience of journalism and of life in New Zealand beyond the capital city.
I'd go from editing a small story from a regional newspaper about a stolen tractor, or updating the ever-present traffic death toll stories we ran daily, to writing breaking news on a plane crash in the Southern Alps or finding out if New Zealanders were caught up in an international tragedy.
It was NZPA's role to get that information and share it with the daily papers - and with varying deadlines throughout the country, I learnt to write a news story very, very quickly. It was always a thrill to get the clippings a few weeks later and realise stories had been printed the length of the country.

It was owned by New Zealand's daily newspaper publishers and supplied the 26 daily newspapers with a 24-hour national and international news service and news images.
All the newspapers paid a subscription, based on their circulation, to share news, and it meant that even a small regional paper with few staff could carry news of national interest if it happened at the other end of the country.
But NZPA's future became uncertain when Australian media company Fairfax decided not to continue subscriptions.
Australian media companies Fairfax and APN now own all but five of New Zealand's daily newspapers.
Fairfax owns the capital's Dominion Post, The Press in Christchurch and The Sunday Star-Times among other titles, while APN owns the country's largest daily, the New Zealand Herald, and a handful of regional daily publications.
Both are increasing their staffing to provide national news for their own publications, which had previously relied on NZPA. APN will also join with the five independent papers to provide an internal newswire.
Greg Tourelle, who worked for NZPA for 15 years, told the BBC: "NZPA was owned by rival Australian companies - which has sometimes been difficult for us, but the main owners are setting up their own agencies so we're going to have a very competitive landscape."
'Sad atmosphere' AAP, the Australian news agency, is also increasing its staffing from one to nine in New Zealand to continue to provide New Zealand news for the Australian market.
Mr Tourelle said about eight staff members had yet to find new jobs. Like many of his ex-colleagues, he has found employment with the companies who played a role in the demise of NZPA, becoming content editor for Fairfax.
"When the announcement was made three months ago, it was greeted with a mixture of shock and sadness. We had been under a cloud for a long time, and we usually bounced back, but this time we haven't," he said.
"There will still be sadness when the last story is transmitted at 6pm NZ time (0700BST) on Wednesday, but we intend to farewell the agency with traditional journalistic gusto, as you'd expect for a news organisation that has given 131 years' service."
In its heyday, NZPA had offices in London, Sydney, Hong Kong, and Christchurch. It sent staff on major sporting tours with national teams, had a permanent team of journalists at parliament and a dedicated business desk, as well as supplying information as diverse as stock exchange data and horse racing results.
"It's sad that the country is losing it's only independent print agency," Mr Tourelle said.
Executive editor of Fairfax Paul Thompson told AP: "NZPA was a key part of the industry for decades and a fantastic servant. But the situation changed."
at August 30, 2011