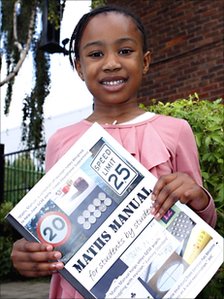 A six-year-old girl from east London, who sat her GCSE maths at the age of five, has passed the exam.
Deborah Thorpe, of Chadwell Heath, thought to be the youngest in England to pass a GCSE, achieved an E grade.
Her father Charles said: "You see young people in the newspapers who have taken exams and you think, why not?"
Deborah, who wants to be a doctor, said maths was not her favourite subject. The girl was among 650,000 pupils receiving their GCSE results.
A spokesman for the Joint Council for Qualifications, which releases the exam results, said the organisation did not hold records on the ages of pupils taking the exams.
But he added that he could not recall a younger GCSE entrant in England.
Last year a boy of seven, Oscar Selby, from Surrey, received an A* in GCSE maths.
Gender gap
Across England, Wales and Northern Ireland the proportion of entries awarded between an A* and a C grade rose for the 23rd year in a row, with 69.8% making the grade.
But boys dropped behind girls yet again at the top grade, with 19.6% of their exam entries awarded A* or A, compared with 26.5% for girls.
Deborah, a pupil at St Bede's Catholic Primary School in Chadwell Heath, takes extra lessons on Saturdays and is not allowed to watch television after classes on school nights.

I wouldn't say that she is too young”

End Quote Charles Thorpe Deborah's father
She said she was not sure whether she would take more exams next year.
Mr Thorpe, 44, a mental health support officer, said: "We thought we might as well just give it a go.
"I wouldn't say maths is her favourite subject, but when she says she wants to be a doctor I tell her that she must be very good at science and maths.
"We want her to be outstanding and exceptional in every way."
Mr Thorpe, who does not think his daughter is too young to cope with exams usually taken by 16-year-olds, said: "I wouldn't say that she is too young.
"Presidents of the world used to be old and now they are middle-aged. The younger generations are taking over now.
"We don't stress her out, telling her 'you've got to do this'."
at August 25, 2011