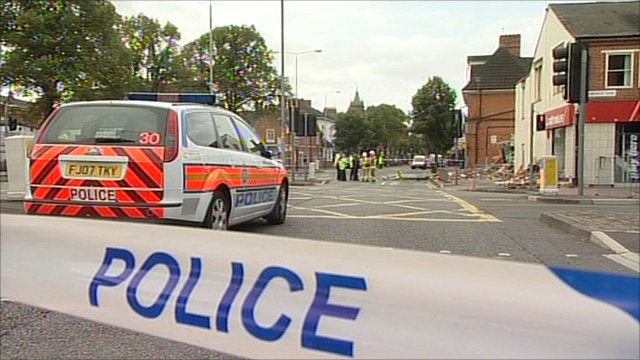 Click to play
Fire crews say it was "incredibly lucky" no-one was badly hurt when the kebab shop exploded
Two men and four women have been arrested after a kebab shop in Leicester was destroyed in a blast.
Emergency services were called to reports of an explosion at a shop in Narborough Road about 02:20 BST and found the building demolished.
The cause of the explosion was being investigated but was being treated as suspicious, police said.
Fire crews said it was "incredibly lucky" passers-by had not been caught by flying debris.
A police spokesman confirmed a criminal investigation was under way.
Buildings evacuated The fire service said a search and rescue dog was used to check for casualties but it is not believed anyone was in the shop.
Station manager Dave Watson said: "It is incredibly lucky that we have not had more injuries and more damage caused.
"The force of the explosion has blown objects for some distance and we have been very lucky that passers-by did not get caught by debris."
Several adjoining properties were evacuated as a safety precaution. Parts of Narborough Road were closed while investigations were carried out.
Nearby resident Julie Bourton described the moment the explosion happened.
"I was in bed," she said. "There was a massive bang and I ran downstairs to see my dad was up and I asked him whether there had been an earthquake.
"He said 'No' and looked out of the window and there was just smoke. We went out to have a look and the shop was just gone."
Leicestershire Constabulary have appealed for anyone with information about the incident to contact them.
at August 29, 2011