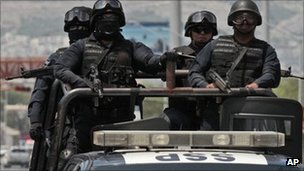 Mexican police have arrested five men in connection with the arson attack that killed 52 people in a casino in the northern city of Monterrey.
State governor Rodrigo Medina said the suspects were believed to belong to the Zetas drug cartel.
Police were investigating whether the casino was attacked because protection money had not been paid, he said
Security in Monterrey has been boosted by the arrival of hundreds more police and troops since Thursday's attack.
Mr Medina, governor of Nuevo Leon state, told Mexican television that the five suspects had confessed to being involved in the arson.
He said that two other people were being sought in connection with the blaze.
The attack was one of the deadliest episodes of violence since President Felipe Calderon launched his crackdown on drug gangs in late 2006.
Rising anger Several gunmen burst into Monterrey's Casino Royale in broad daylight, dousing it with fuel and setting it alight.
Panic ensured with people inside struggling to reach the emergency exits or taking refuge in back offices or toilets. Many were overcome by smoke which spread rapidly through the building.
The horrific nature of the attack brought several hundred people onto the streets of Monterrey on Sunday to urge an end to the violence. 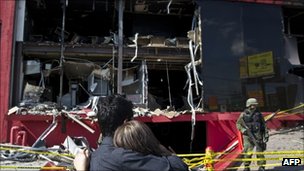 The deaths in Monterrey shocked the entire country
There were also calls for local leaders - including Mr Medina - to resign.
Speaking to the media on Monday, the governor insisted he would not quit his post.
"I am not going to resign; on the contrary, it is the time to stay united, to fight and remain here," he said.
Monterrey and the state of Nuevo Leon have seen rising violence as the Zetas and Gulf cartels vie for control of trafficking routes to the US.
The drug gangs are also increasingly involved in kidnapping and extortion.
Some 40,000 people have been killed in drug-related violence across Mexico in the past five years.