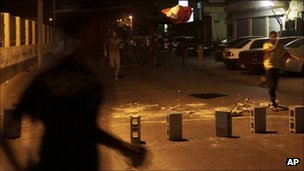 A teenage boy has died after being hit by a tear-gas canister fired by Bahraini security forces trying to disperse a protest, activists say.
Ali Jawad Ahmed, 14, was among a small crowd who had gathered overnight in the village of Sitra, said the Bahrain Youth Society for Human Rights.
The group said security forces personnel had used "excessive force".
A police official told the state news agency that the incident was being investigated but gave no other details.
"There was no reported police action against law-breakers... at the time the boy's death was reported, except dispersing a small group of around 10 people at 01:15," BNA quoted the official as saying.
Isa Hassan, the teenager's uncle, said police officers had overreacted when confronted by a small group of protesters. He said the tear gas canister was fired from about 7m (21ft) away, directly at the crowd.
"They are supposed to lob the canisters of gas, not shoot them at people," he said at the funeral, according to the Associated Press. "Police used it as a weapon."
One activist told the BBC that Ahmed was hit in the face by the canister. The Bahrain Youth Society for Human Rights published a photograph showing the boy with blood seeping from his mouth.
More than 30 people have been killed in Bahrain since protests began in February, with the island's Shia majority demanding political, social and economic reforms from the Sunni royal family.
In mid-March, King Hamad Al Khalifa called in troops from neighbouring Sunni Gulf states to crush the dissent and imposed a state of emergency.
Small-scale clashes between security forces and demonstrators have become a near nightly event since emergency rule was lifted in June.
at August 31, 2011