Five killed in Gaza as rockets hit Israel despite truce 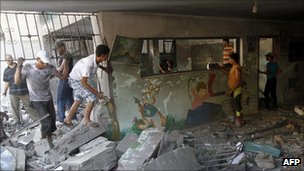 Israeli air strikes have killed five people in Gaza, while a barrage of rockets fired by Palestinian militants into Israel has wounded a baby.
Two Islamic Jihad leaders died and three civilians, one of them a tunnel smuggler, Palestinian medics said.
Meanwhile, Gaza militants have fired 19 rockets and mortar shells into southern Israel since Wednesday, the army said.
The attacks threaten an informal truce agreed by Israel and Hamas on Sunday after days of escalating violence.
The informal ceasefire was called in an attempt to halt rising tensions, following a series of shooting attacks near Eilat last Thursday, which killed eight Israelis.
In the following days, Israeli air raids on Gaza killed 15 people, and more than 100 rockets and mortar shells were fired from Gaza at Israeli towns and cities, killing one man.
Many more were wounded on both sides.
Shaky truce
Two local commanders of the Islamic Jihad militant group were killed in Israeli air strikes on Wednesday - the first in the southern town of Rafah and the second in Gaza City, Palestinian officials said.
The others killed are said to have been civilians, including a 65-year-old man, a tunnel smuggler and a man inside a sports hall, said Adham Abu Selmiya, a spokesman for Gaza's emergency services.
At least 15 people were wounded in the air strikes, including four women and five children, he added.
The Israeli military says its targets were involved in weapons smuggling and launching rockets at southern Israel, the BBC's Yolande Knell reports from Jerusalem.
Residents in Ashkelon were sent running for cover from the incoming Palestinian rocket fire, and a three-month-old child was wounded by shrapnel from one of the rockets, Israel's rescue service said.
Islamic Jihad said its militants had carried out the latest rocket and mortar attacks after the killing of its leaders on Wednesday, in Israeli missile strikes on their cars.
Hamas, which governs Gaza, accused Israel of undermining the truce it announced late on Sunday, having pressured smaller, more radical militant groups to join it.
"Such aggressive behaviour confirms that Israel has no true intention of maintaining the truce and insists on escalating the situation," Hamas said.
Israeli Prime Minister Benjamin Netanyahu convened his security cabinet on Wednesday, Israeli public radio said, two days after it had agreed to limit the response to rocket fire from Gaza.
at August 25, 2011